Two different versions of the song were played aloud 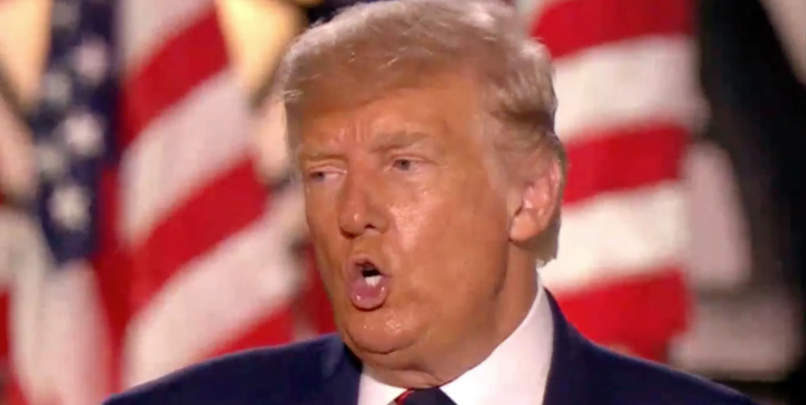 Last night, Donald Trump accepted the Republican party’s nomination to be President of the United States. As the RNC came to a close, and as fireworks lit up the Washington Monument with the words “Trump 2020”, the norm-shattering display was soundtracked by two different covers of Leonard Cohen’s “Hallelujah” .

The Canadian Cohen’s most famous song — a moving exploration of spirituality, humility, and orgasms — was first heard in a cover by Tori Kelly, in between “She’s a Grand Old Flag” and “God Bless the USA”. Minutes later, “Hallelujah” received a much-louder on-camera encore from opera singer Christopher Macchio. As Variety reports, Kelly tweeted out that she had been, “Seeing messages about my version of ‘Hallelujah,’”and added, “All i know is neither myself nor my team received a request.” The tweet has subsequently been deleted. Check out the fireworks display including Kelly’s “Hallelujah” below.

Trump has often been accused of appropriating songs without artist permission. His behavior prompted dozens of songwriters to sign an open letter demanding that politicians obtain proper usage rights, and Neil Young took the additional step of suing. But even if Trump didn’t have the legal right to use “Hallelujah” in this way, that would hardly be the worst violation of the 2020 RNC.

This was the first American political convention ever held at the White House. By wielding Federal powers to promote the campaign, members of the Trump administration would seem to be in violation of the Hatch Act. The President and Vice-President are exempt, but acting Homeland Security Secretary Chad Wolf performed a naturalization ceremony during a broadcast as Trump looked on, and Secretary of State Mike Pompeo delivered a campaign speech from Jerusalem while on an official State visit.

According to the U.S. Office of Special Counsel, violating this law comes with a penalties of “removal from federal service, reduction in grade, debarment from federal employment for a period not to exceed 5 years, suspension, reprimand, or a civil penalty not to exceed $1,000.” It is unlikely that either Pompeo or Wolf will be formally investigated, let alone punished, in yet another example of how the rule of law has degraded under Trump. It’s fucking depressing, so distract yourself with other recent Leonard Cohen covers, such as two Cohen cuts from David Gilmour and family, Bill Callahan’s “So Long, Marianne” and Myles Kennedy’s “Hallelujah” with Jeff Buckley’s guitar. Last year, Cohen’s posthumous album Thanks for the Dance was one of our favorite releases of 2019.