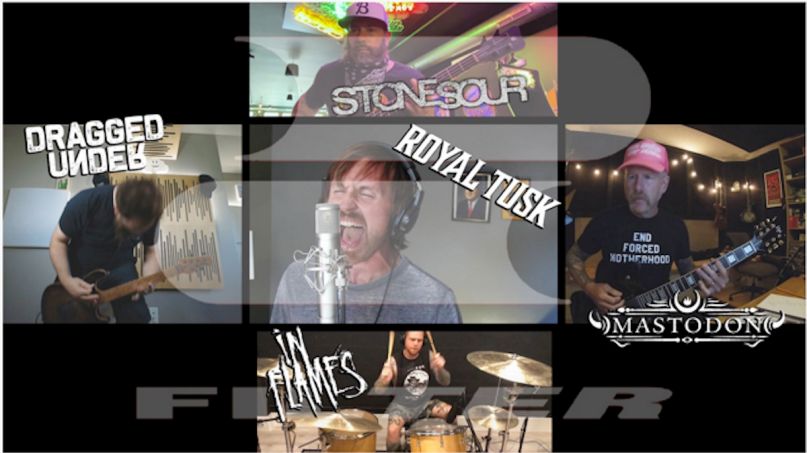 Throughout the pandemic, musicians have been coming together for a number of impressive socially distant performances. A new collaborative cover of the Filter classic “Hey Man Nice Shot” featuring members of Royal Tusk, Mastodon, Stone Sour, and more is premiering right here at Heavy Consequence.

Regarding the decision to cover the Filter song, Carriere told us, “I first heard ‘Hey Man Nice Shot” on a compilation cassette I bought in grade 7 called Absolute 90s. Filter was alongside The Lemonheads, Dinosaur Jr, and Sonic Youth, to name a few — tt was a great album all around, but ‘HMNS’ stuck out to me. There was something honest, gritty, and dirty about that song, and I couldn’t get enough.”

He continued, “All the tracks from [Filter’s album] Short Bus, which this song came from, are awesome, but this one has stood the test of time. I would argue that, in a way, the song hits even harder against the backdrop of music today. They are a wildly underrated band, and I jumped at the chance to pay homage to them with this cover! Also, the Budd Dwyer story which the song is about his jaw-dropping.”

As mentioned, this socially distant collaboration follows a bevy of likeminded performances we’ve been covering over the past few months. While discussing his own collaboration, Carriere takes us through the process of how these all-star jams come together.

“There have been some dope collab covers during the pandemic, and I was happy to throw my hat in the ring,” remarked the Royal Tusk singer. “Generally, things like this are exciting to come up with, but the execution is the hard part.”

He added, “I couldn’t believe it when roughly 12 hours or something after I put the idea out there Tanner had the full tune filmed and recorded. He crushes on drums and set a precedent to make it happen. Fluff is a wizard and had his parts done up right quick. Then it was the bearded wonder, Chow, killing it on bass, Myself, and Bill with the Mastodon vibe final touches. We put it together quickly and had a blast doing it. I look up to all these dudes, so I’m honored to be part of it.”

Check out the all-star cover of Filter’s “Hey Man Nice Shot’ below: