Geddy Lee Is Closer to the Heart of Toronto Blue Jays Game, Thanks to Cutout of Rush Legend

Catcher Caleb Joseph: "I had a great pre-game chat with Geddy. He looks great." 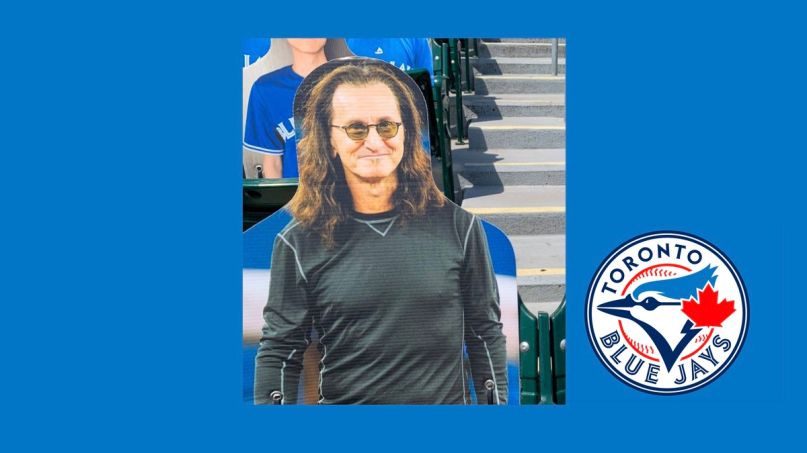 While they may be playing in Buffalo, New York this season, the Toronto Blue Jays are still beaming with Canadian pride. The band shined the spotlight on one of Canada’s greatest music icons, Geddy Lee, at Tuesday night’s game, with a cutout of the Rush legend placed right behind home plate.

Just days before the shortened Major League Baseball season began in late July, the Blue Jays were told by Toronto officials that they wouldn’t be allowed to play in their home ballpark, due to the COVID-19 pandemic. After reaching out to other MLB teams, they finally settled on the stadium of their minor league affiliate the Buffalo Bisons. It took a few weeks to upgrade the park to Major League standards, but the Blue Jays finally played their first home game at Buffalo’s Sahlen Field last night.

In place of real fans at stadiums this season, we’ve already seen cutouts of late Pantera drummer Vinnie Paul at a Texas Rangers game, and one of late Metallica bassist Cliff Burton’s father Ray at a San Francisco Giants game. Now, the Blue Jays are featuring some star power with Geddy Lee.

Prior to the first pitch of the Blue Jays game against the Miami Marlins, the team tweeted out the cutout of the Rush singer-bassist in its seat next to one of a woman known as “Home Plate Lady”. Apparently, she’s been a fixture at Blue Jays games for years and even has a parody Twitter account even set up in her honor. The caption read, “LEGENDS. Where they belong, Behind home plate!”

The Rush frontman, who was born in the Toronto neighborhood of Willowdale, happens to be a big baseball fan. He grew up rooting for the Detroit Tigers, since the Blue Jays didn’t exist when he was a kid, but once Toronto was welcomed as an expansion team in 1977, he became a devoted Jays fan.

The Rock & Roll Hall of Famer proved to be a good-luck charm for the Blue Jays, as they beat the Marlins 5-4 in extra innings.

As his outfit reveals, the photo of Geddy Lee was taken when he threw out the first pitch at a Blue Jays game in 2013. See the aforementioned tweets, and video of that first pitch below.

Editor’s Note: Stay safe and pick up a custom face mask from Consequence of Sound. A portion of the proceeds benefit MusiCares’ COVID-19 Artist Relief Fund.

It’s #OpeningDay for @BlueJays at home today! Major thanks to those who have done an amazing job with Shalen Field. Also, had a great Pre-Game chat with @rushtheband Geddy today. He looks great! pic.twitter.com/fP8DQsrhBW