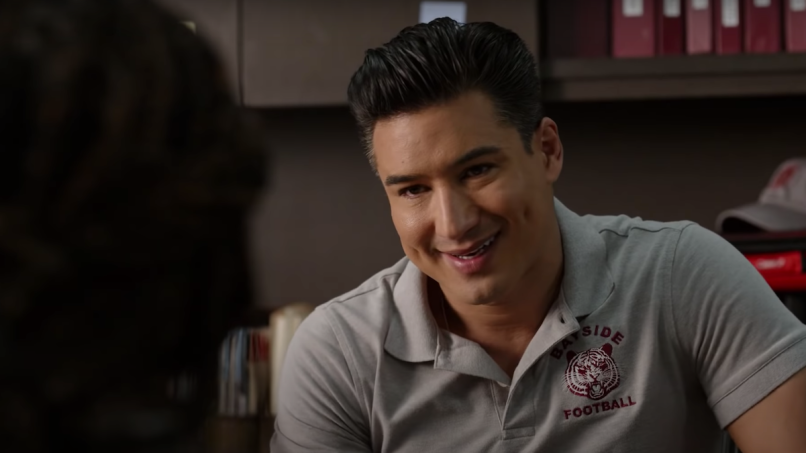 Mario Lopez in the Saved by the Bell reboot

Peacock has released a new trailer for its upcoming Saved by the Bell reboot, and despite the use of The Pointer Sisters’ “I’m So Excited”, we’re not feeling pumped to be back in Bayside.

The upcoming series’ first teaser laid out the groundwork for some naturally referential, cute humor that would bring A.C. Slater (Mario Lopez) and Jesse Spano (Elizabeth Berkley) back to their old stomping ground. However, the new preview strips away the “natural” and “cute” and lands at just “groan-inducing.”

The plot finds Governor Zack Morris (Mark-Paul Gosselaar) forced to ship low-income students (read: minority) from closed schools to “better performing” places like Bayside High. His own son, Mac Morris (Mitchell Hoog) now roams the halls, a smug, privileged, asshat version of his already questionable father. Meanwhile, Slater returns to relive his glory days as a gym teacher, while Spano is there apparently to make fun of her emotionally devastating addiction to caffeine pills. We get the need to make the reference, but maybe don’t belittle the original intent in the process.

There are jokes about the school seniors being literal geriatrics (get it? Anyone who gets the in-jokes in this show must be so old by now!), a quarterback shocked to find he’s not holding a ball, and a Rob Kardashian crack. It feels like Peacock’s Saved by the Bell was aiming for 21 Jump Street but landed at Fuller House. Take a look below.

Due to production delays caused by COVID-19, there’s no release date for the new Saved by the Bell as of yet. In fact, there was a dearth of original content when Peacock launched last month, but hopefully that will soon change. The ad-supported streaming service just confirmed a MacGruber reboot featuring Will Forte returning as the titular hero.