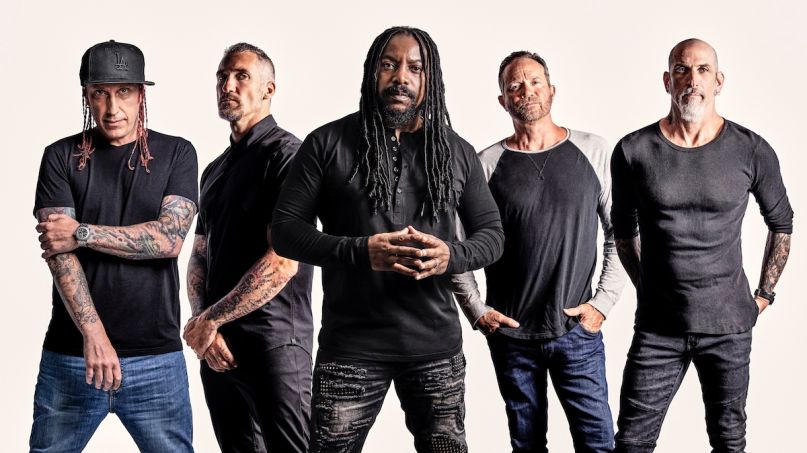 Sevendust are gearing up to release a new album called Blood & Stone, and the Atlanta-based metal act has unleashed the first original song from the upcoming set.

The band previously released a cover of Soundgarden’s “The Day I Tried to Live” as the first single from Blood & Stone, but “Blood from a Stone” marks Sevendust’s first original tune since their acclaimed 2018 album All I See Is War. The track has a vintage Sevendust vibe, with thick, moving riffs from Clint Lowery and John Connolly; heavy rhythms from bassist Vince Hornsby and drummer Morgan Rose; and powerful, soaring vocals from Lajon Witherspoon.

“’Blood from a Stone’ was inspired by the endurance and threshold of our band, the wins and the losses, the good and bad years. That we have more to give, more to say and we pull that out of each other,” Lowery said in a statement.

The Grammy-nominated rock band’s 13th studio album will arrive October 23rd via Rise Records, containing a total of 13 songs. Michael “Elvis” Baskette — known for his work with Alter Bridge, Tremonti, Slash, and more — produced the set, returning to the fold after helming All I See Is War.

Watch the lyric video for “Blood from a Stone” below, and pre-order Blood & Stone here.

Previous Story
10 Bill & Ted Quotes You Probably Say All the Time
Next Story
10 Years and 10 Questions with William Sadler: On Bill and Ted, Tales from the Crypt, and Never Fearing the Reaper
Popular
More Stories
[fu-upload-form form_layout="media" title="Submit Your Photo"][input type="hidden" name="ugc" value="1"][/fu-upload-form]