Her grandmother and godmother have both died, while her sister is currently hospitalized and "not doing well" 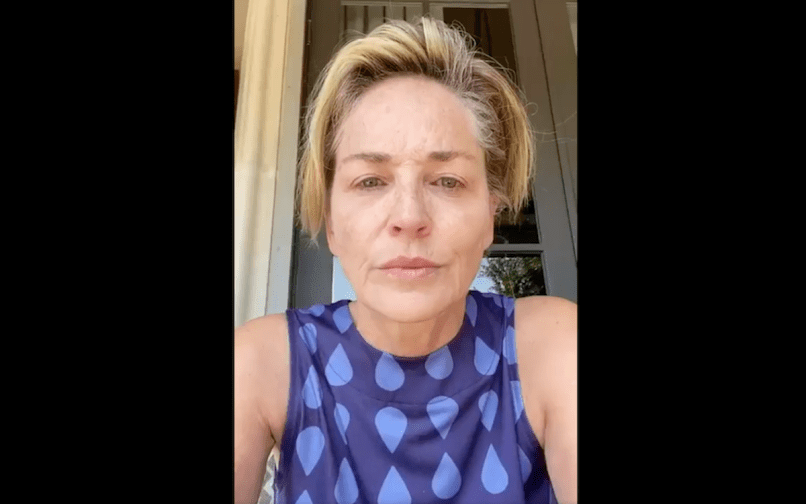 In a series of emotional social media posts, Sharon Stone has opened up about her family’s experience with the novel coronavirus. She said her grandmother and godmother have both died of COVID-19, and now her sister and brother-in-law are in the hospital, with sister Kelly Stone “not doing well.” The veteran actress is begging her followers to “vote for Biden,” adding, “Please, whatever you do, don’t vote for a killer.”

Stone began to vent her frustrations on Sunday with an Instagram picture of her sister’s hospital room. She explained that Kelly “already has lupus,” and “does not have an immune system.” She added, “One of you Non-Mask wearers did this.”

Because of her immune-compromised condition, Kelly had apparently been extremely careful about social distancing, and only left her house to go to the pharmacy. In her own statement on Instagram, she explained that she and her husband, Bruce, had isolated in Montana on March 13th. She wrote, “We thought covid wouldn’t and couldn’t find us. No shopping, no parties, barely saw a human. Now fighting for a breath.”

After reposting her ailing sister’s message, Stone unloaded in an Instagram video late Sunday afternoon. She said that it was a matter of “compassionate integrity versus politics and greed,” before excoriating the coronavirus response in the state of Montana and at the federal level. She railed against the resources put into COVID testing in our country, explaining,

“When they say there are tests for everyone, they are lying. When they say there are tests even for the nurses in the hospitals, they are lying. People are dying and fighting for their lives because there’s nothing but lies, and because the people at the governor’s houses, and the people at the health departments, are simply so overwhelmed that they’re not answering the phones, they’re hanging up, and not returning calls. This is the state we’re in. The only thing that’s gonna change this is if you vote, and if you vote for Biden, and vote for Kamala Harris.”

Stone added that Harris was especially important, “because with women in power, we will fight for our families.” She continued, “The only countries that are doing well with COVID are the ones that have women in leadership.” (Editor’s Note: Facts.) Stone concluded with another call to kick out Trump on November 3rd. “Please vote,” she said, “And please, whatever you do, don’t vote for a killer.”

Agree or disagree, the 62-year-old actress isn’t likely to care. Stone has never been shy about sharing her politics or select details of her personal life, including that she joined the dating app Bumble. She’s had recent roles in The New Pope and The Laundromat.

Editor’s Note: Heed Stone’s warning by picking up one of our custom face masks, such as the new Lux collection below. Proceeds will benefit MusiCares’ COVID-19 Artist Relief fund supporting independent musicians, as well as Consequence of Sound, an independent media company.

My sister Kelly, who already has lupus, now has COVID-19. This is her hospital room. One of you Non-Mask wearers did this. She does not have an immune system. The only place she went was the pharmacy. There is no testing in her county unless you are symptomatic, & then it’s 5 day wait for results. Can YOU FACE THIS ROOM ALONE? Wear a mask! For yourself and others. Please 💜.