During his performance, singer Steve Harwell seemed to mock the pandemic, saying, "We're all here together tonight! Fuck that COVID shit!" 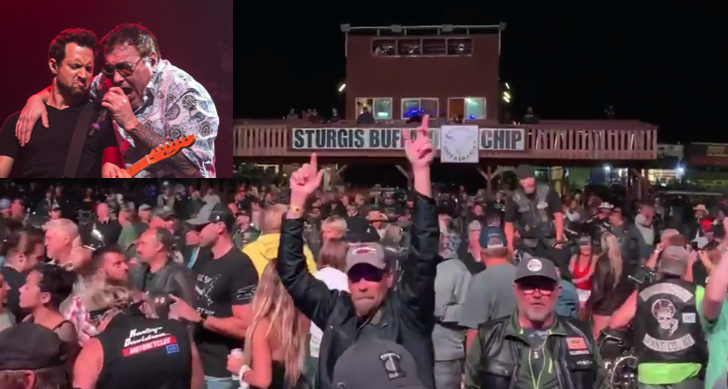 In the aftermath of this year’s Sturgis Motorcycle Rally, festival headliners Smash Mouth (those words haven’t been written in a decade or two) have shared some of the hate mail they’ve received.

The rally took place from August 7th to 16th and Smash Mouth held down the Sunday night slot at the flagship event, the Sturgis Buffalo Chip. During their set before a large, mask-less crowd, lead singer Steve Harwell seemed to mock the pandemic, shouting, “We’re all here together tonight! Fuck that COVID shit!” The message may have resonated for Sturgis attendees, but for others, it left the band with the shape of an ‘L’ on their foreheads.

Now, in an Instagram post, the “All-Star” rockers have revealed an angry letter from a fan. It depicts a shattered CD sprinkled over a hand-written note. Only a few words are visible — “kills,” “selfish,” “mother fuckers,” — but the gist is clear. Smash Mouth captioned the picture, “recent fan mail.”

Social media comments have also been critical. “You should be ashamed of yourselves for not putting the greater good for all above financial gain,” one person wrote; another said, “Have seen you guys four times in four different cities and always looked up to you, but this was a really bad — uncharacteristically, I believe — decision. I hope you guys are doing something to make it right, and raise awareness.” Still, Smash Mouth has a few supporters. “I live in Sturgis and work at a bar here,” said a fan, “went to the concert and I didn’t get sick so go me I guess.”

The band has since tried to social-distance themselves from Sturgis. In a later Instagram post, they emphasized that “Science is real,” and group manager Robert Hayes defended their pandemic protocols to Billboard.  He said that the venue had a very strict “mask policy in place for all workers,” adding,

“Everything backstage was sanitized, etc. The band has their own Covid addendum to their rider as well and the promoter and venue adhered to all of our requests. We spent endless hours advancing this event to make sure that it was pulled off as safely as possible and we are very happy with the outcome.”

That “outcome” includes over 100 coronavirus cases in eight states.  It’s already among the worst known super-spreader events since Mardi Gras, with cases expected to rise.