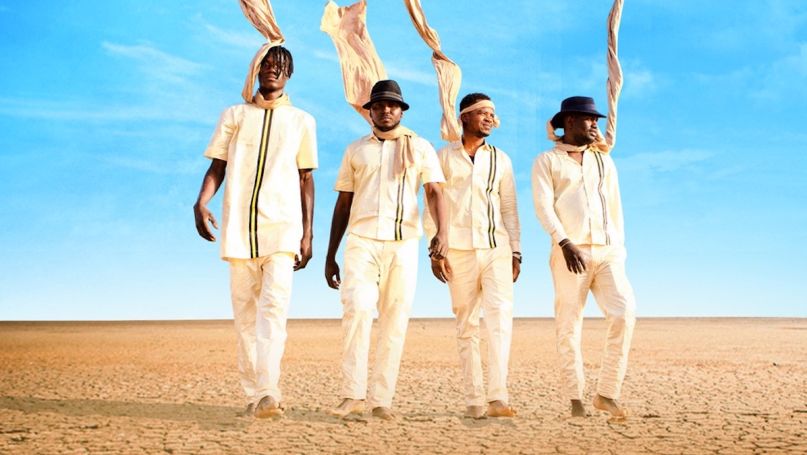 Malian desert blues outfit Songhoy Blues have announced their third full-length album, Optimisme. It’s due out October 23rd through Fat Possum Records in the US and Transgressive everywhere else.

The record’s title is French for “optimism”, a theme that reflects heavily in their activist-inflected music: Even while calling for resistance against oppression, they’re still able to infuse their work with upbeat, jubilant rhythms and indie-dance guitar arrangements. The group emphasized the need for hope during these unprecedented times in a recent interview with KEXP.

“Right now, the whole world is going through a difficult situation,” said singer Aliou Touré. “And for us it’s more than important to bring an optimist philosophy and an optimistic energy to all this Songhoy Blues fans.”

That’s not to say Optimisme isn’t full of heavy themes, though. “Korfo,” which translates to “chains” in Songhai, is about the horrors of the African slave trade. Another track called “Fey Fey”, which means “division”, illustrates the separatist tensions in their home country.

To kick off today’s announcement, Songhoy Blues are sharing “Badala,” the album’s second single following “Worry” from July. It translates to “I don’t care”/”I don’t give a shit” in Songai, which is a 2020 vibe we can all certainly back. The song is about Malian women’s struggle for equality in their country, and the misogyny they face from men.

Below, stream the dance-worthy yet forceful song, which feels perfect for the moment.

Produced by Matt Sweeney (Stephen Malkmus, Run the Jewels), Optimisme follows 2017’s Résistance and Music in Exile from 2015. Upon the release of the latter debut album, the band was featured in They Will Have to Kill Us First, a documentary about the unique challenges facing Malian musicians throughout the 2012 sharia law imposition by Islamic extremists, and the subsequent banning of radio stations and live music.