"There is zero chance of me falling," he promises while livestreaming himself on Instagram 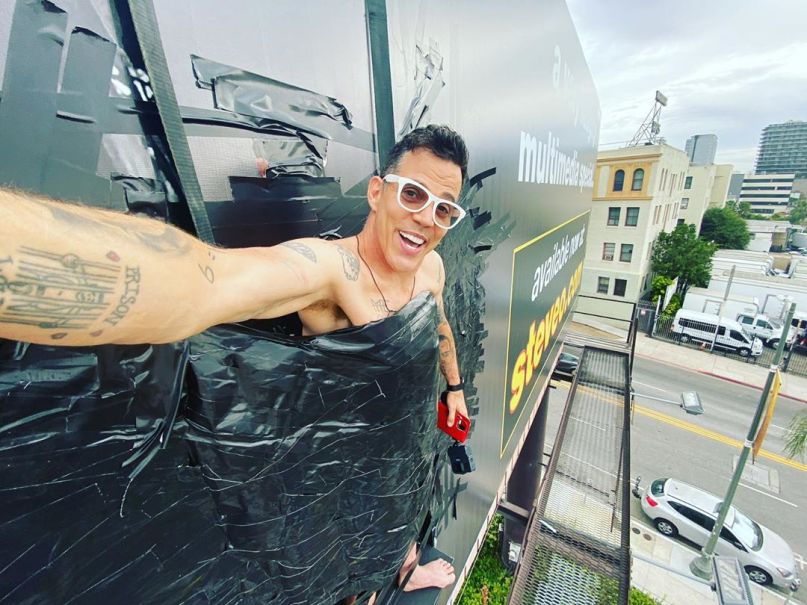 Jackass star and all-around comedian Steve-O duct-taped himself to a billboard in Los Angeles on Thursday to promote Gnarly, his upcoming special. He’s been hanging there since this morning, notes Rolling Stone, in what’s one of his most surprisingly safe publicity stunts.

According to an Instagram post, Steve-O was securely rigged to the billboard earlier this morning by a team of professionals. “There is zero chance of me falling, and it’s important to me that we not waste any valuable city resources on this. I’m happy to just hang out,” he wrote. In photos of the set-up, it’s clear Steve-O has a small platform by his feet on which to stand, and his arms and legs are not taped so as to allow for movement.

Four hours ago, the stuntman livestreamed himself while taped to the billboard with one of his free hands. In the Instagram story, he said he was getting a little sore and that cops had shown up to monitor the situation. “They say they’re not sure that I’m committing any crimes,” said Steve-O. “I don’t think so. I paid for the billboard, man!”

As for the thing he’s promoting, Gnarly is a self-described “comedy special loaded with really dumb stuff.” It’s an hour long and you must be over 18 years old to watch it. It’s currently available to rent for $9.99 at Steve-O’s website.

I’m attached to a billboard right now (swipe to see the whole thing) and want to emphasize that a team of real professionals rigged everything safely. There is zero chance of me falling, and it’s important to me that we not waste any valuable city resources on this. I’m happy to just hang out, and really want the world to know about this project I worked so hard on. It’s called Gnarly and, If you’re over 18, check it out at steveo.com! Thanks!