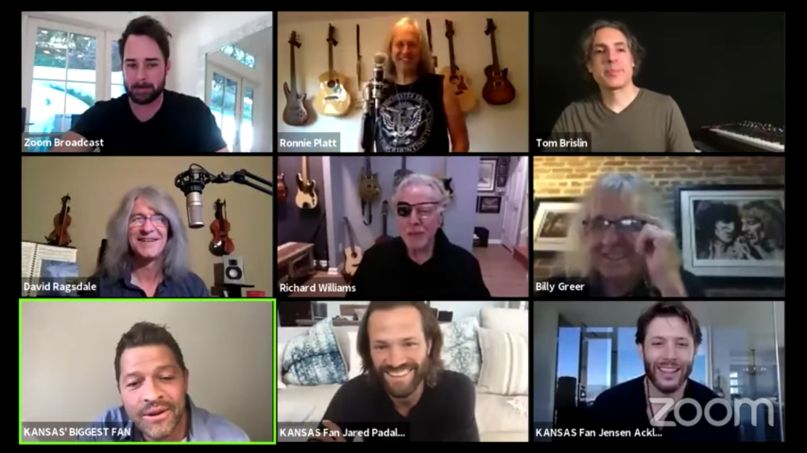 Supernatural fans were recently touched by an angel. Over the weekend, star Misha Collins, who plays the winged Castiel on the long-running CW series, hosted an online sing-along of the show’s spiritual anthem: Kansas’ “Carry On Wayward Son”.

Joining Collins were the Winchester brothers themselves Jensen Ackles and Jared Padalecki, members of the SPN family, and, yes, Kansas. Together, over digital campfire, they sang their hearts out, treating the Zoom room like a sweaty convention floor.

The online reunion was part of Collins’ ensuing GISH (Greatest International Scavenger Hunt) event, which continues to benefit charities across the world. This was just one of many spectacles the star has offered all summer long.

Elsewhere in the 20-minute chat, conversations ranged from summer sweat to would-be Zoom backgrounds to various trivia involving the ’70s rock legends. For fans, it was simply a treat seeing the trio back together — even if they were boxed apart.

After all, Supernatural was set to end its epic 15-year run this past May — that is, before the pandemic hit and changed everything. Instead, production was forced to shut down, leaving half of its final 15th season in limbo until filming can resume.

The good news is that the first half of the final 15th season is currently on Netflix, in addition to — get this — all 14 prior seasons. You may think that’s a daunting task — and it certainly is — but this writer can attest to it being … quite a quick watch.

Reunite with the Winchesters below, and head to GISH to become a hunter yourself.