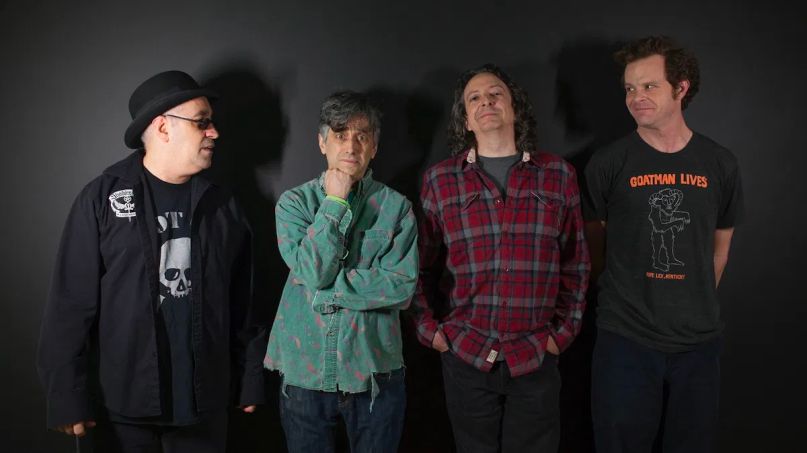 The Dead Milkmen are back with a brand new song called “A Complicated Faith”, a track the legendary Philadelphia punk rockers are premiering right here via Consequence of Sound.

The song appears alongside a cover of Heaven 17’s 1981 song “(We Don’t Need This) Fascist Groove Thang” on a new 7-inch single that arrives Friday (August 21st) on vinyl and via digital outlets. While the first pressing of translucent red vinyl is already sold out, a second pressing on blue vinyl has now been announced. Those will ship in November.

“A Complicated Faith”, which has a new wave / post-punk vibe, marks the band’s first new original song since their 2017 EP Welcome to the End of the World. Instead of supplying us with a traditional quote about the track, the ever-entertaining Dead Milkmen gave us insight into a full band conversation:

Rodney Anonymous: “In retrospect, I feel that some parts are overly processed. I take 100% of the responsibility (and 50% of the medication) for this oversight.”

Dan Stevens: “Yeah, the guitar solo is at the very beginning of the track.”

Rodney Anonymous: “We added it while you were napping. But we did use your hands to play it.”

Joe Jack Talcum: “I enjoyed playing the song live and it was fun to record it in Joe’s Garage. I almost thought it would never come out but it’s almost a blessing that it got delayed because this is a really good moment for it.”

Talcum’s last line refers to The Dead Milkmen’s original plans to record and release a new album this year. While the pandemic has put those plans on hold, the band now hopes to release a new album in 2021. “We had half an album already written and demoed,” said Talcum, “and now I think we’re probably going to start all over again.”

The second pressing of the 7-inch on blue vinyl will ship in November via the socially conscious label The Giving Groove, with proceeds benefitting the charity Girls Rock Philly. Digital downloads are available beginning Friday (August 21st) via Apple Music.

Listen to “A Complicated Faith” in the Soundcloud player below.