From their just-released album Imploding the Mirage 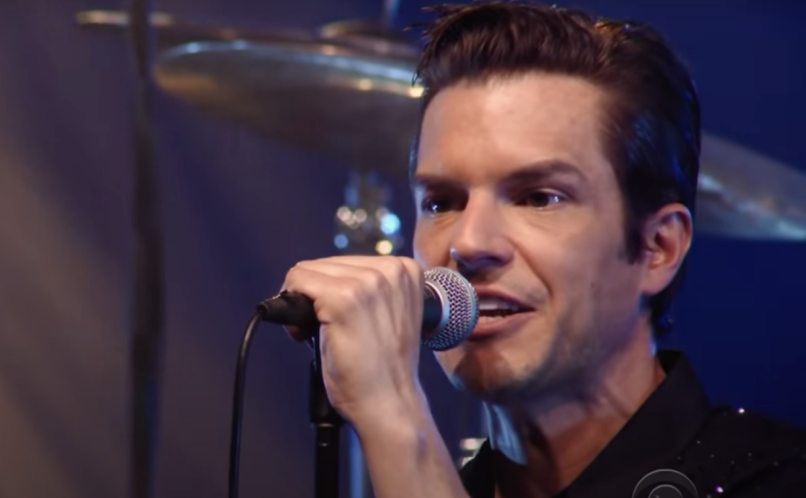 The Killers on Colbert

Today, August 21st, The Killers dropped their new album Imploding the Mirage. That made yesterday Album Release Eve, and the band celebrated with a Late Show performance of the recent single “Blowback”.

The twin demands of social distancing and television lighting kept the performers rooted in place. But the Las Vegas rockers have an almost spiritual commitment to putting on a show, and they found plenty of ways to inject drama.

The first was singer Brandon Flowers‘ shirt, which came covered in a whole Dollar Store’s worth of rhinestones. The Killers also placed a giant Marquee light shaped like a “K” center stage, rakishly tilted to the side and quietly winking at the cameras. And if the the flashing stage lights didn’t keep your attention, perhaps it’s because you were captured by the twinkling in Flowers’ eye — he’s done a tremendous number of press performances this release cycle, and his energy has never dipped.

Watch video of the “Blowback” performance below.

The Killers originally premiered “Blowback” on CBS This Morning, where they also covered Tom Petty. Over the last few months, they gave a bathroom performance of “Caution” on Kimmel, and then on Fallon they dedicated the same song to frontline workers. In the wake of recent police brutality, the group reworked “Land of the Free” with new lyrics about George Floyd.

Last month, accusations of sexual misconduct were made against The Killers’ 2009 touring crew. The band launched a comprehensive internal investigation, but “no corroboration” or evidence of such an incident was found.