The Nude Party Share the Origins of New Single “Cure Is You”: Stream 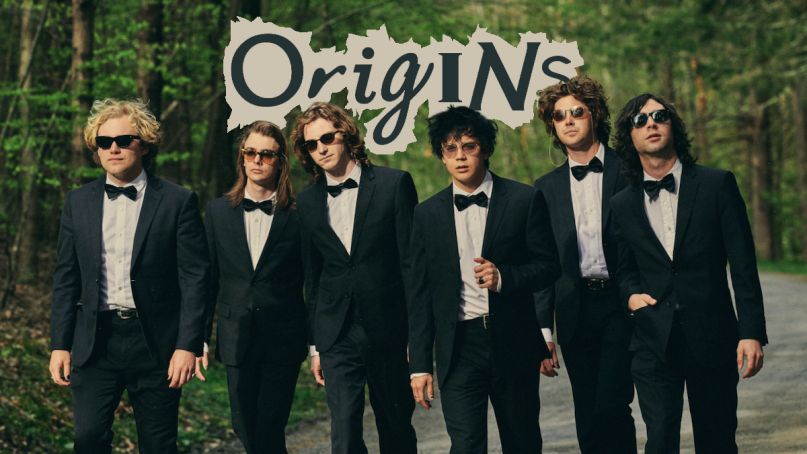 In our new music feature Origins, we give artists the opportunity to expound on the background behind their latest single. Today, The Nude Party explain why the “Cure Is You”.

Between their breakout self-titled debut in 2018 and sitting down to write their forthcoming follow-up, The Nude Party were relentless road warriors. It’s no secret the touring experience can put strain on young musicians, and when your band has six members, it’s only compounded. The North Carolina sextet faced all sorts of tribulations — breakups, stress, interpersonal troubles — and through it all, they were stuck in a creative dry spell.

Performing all over the world was great, of course, but there was no time to confront their conflicts in new songs. That is until they relocated to producer Oakley Munson’s farm in the Catskills. There, as they worked the fields for their keep and recorded what became their sophomore LP, Midnight Manor, they realized that relying on each other despite their struggles is what got them through.

Now, that’s not to say that the album’s new single “Cure Is You” is necessarily about their band dynamics, but it certainly could be. A fuzzy psychedelic sway of fat bass, moseying drums, and an autoharp melody, the track feels like it’s pulled out of a yellowed vinyl sleeve from the ’70s. It finds all six Nude Partiers comfortably in their groove as they sing of finding respite from the world’s ills in the company of another. “The point has hit the prick/ This little world of ours is sick/ Cut it up! Shoot it up!” sings frontman Patton Magee before his bandmates join in for the simple and sweet chorus: “The only cure is you”.

Take a listen to The Nude Party’s “Cure Is You” ahead, followed by Magee’s explanation of the song’s Origins.

Midnight Manor is due out October 2nd via New West Records, and you can pre-order it now. You should also check out the video for the album’s lead single, “Shine Your Light”.

One of the sounds we were really aiming to nail on this song was a good fat gnarly fuzz tone. There’s a song by a now-defunct Asheville band called The Shine Brothers, “Manic Swing”, that has such a big nasty fuzz riff right at about 1 minute. We tried a lot of guitars, amps, pedals and tape effects and finally landed on a combo that slaps: the Rickenbacker 335 through a Malekko B:assmaster Fuzz Pedal out of a ‘59 Fender Bassman.

A huge influence for me is Dr. John the Night Tripper. I love the way he weaves in foods and medicines and landmarks into his lyrics, and the spooky minimalism on a lot of the Gris-Gris stuff. The talk of strange folk medicines are an indirect homage to the Doctor, a la “Gris-Gris Gumbo Ya Ya”. This case being the inverse to him, a basketcase patient rather than a healer.

The ideas for the chord progression and rhythm of this song came while messing around with an old autoharp we had laying around the house. It’s a unique sounding instrument because it’s quite literally a miniature harp that has 36 strings on it. The range of sound and voicing of chords is something you can’t really get on other instruments. They also have dampeners that are essentially little buttons that automatically make chords when you press them down so it’s a wonderful instrument for beginners or drummers. The seventh chord buttons offer an especially pretty alternative to your run-of-the-mill notes and inspired the melody for this song. The autoharp was traditionally used in a lot of Appalachian folk music which is something we were exposed to living in the mountains of North Carolina. Mother Maybelle Carter is probably the most famous person to play the instrument so this feels like a fitting song for these strange and often dark times.

The lyrical ideas for the song originally came from a measles outbreak near our town that was caused by children not being vaccinated and sent to school. It was sad and strange to hear of this disease that seemed to have been eradicated come back to haunt folks for their own actions against the cure for it. This was all ironically happening almost a year before we knew our world would be stopped in its tracks by a global pandemic, but some of the themes and words Patton and I came up with reflect on our abstract remedies as humans used to prevent problems that ultimately just stem from our own mentality or actions. The song took on a new meaning once the world was battling COVID-19, but we still see these themes in the folks who denounce the advice of experts on diseases, refuse to wear masks, and continue to fight for their right to gather en masse while many people become sick or die around them every day.

I’m a big fan of John Cale and especially this track because of its ending. As the song begins to end, all of the instruments increase in intensity and spiral out of control. The song then abruptly ends in a way that seems almost accidental or that the band playing could have continued long after the recording stopped. We tried to channel a little more energy into the end of our song, especially with the overdriven fuzz tones we used on guitar. It’s a fun way to close a song.