As part of the augmented reality event "The Weeknd Experience" 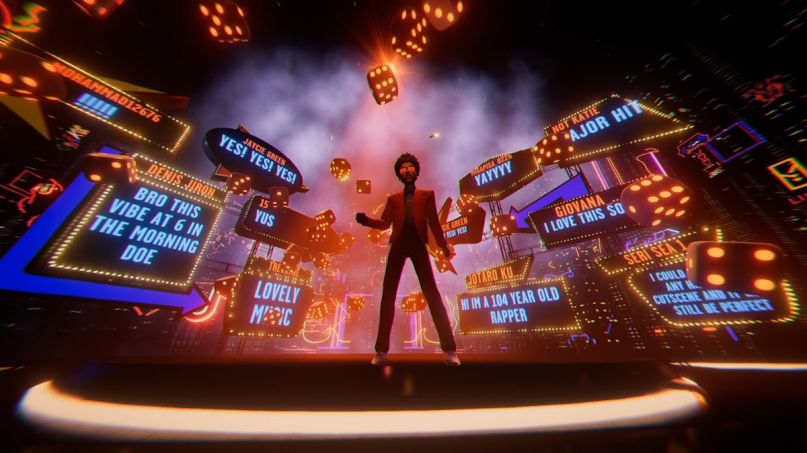 The Weeknd turned his usual live shows into a virtual extravaganza Friday night during “The Weeknd Experience”, an interactive, after-hours, augmented-reality livestream held on TikTok.

“The Weeknd Experience” was TikTok’s “first-ever in-app cross reality experience,” and it seems like it went pretty well, all things considered. The virtual performance spanned 20 minutes and was propped up by 3D visuals, interactive voting, and miniature screens on which fans’ comments could be selected and projected onto. Throughout the set, viewers watched the set from an audience’s perspective and had a say in which songs The Weeknd would play.

The setlist itself was pretty short, consisting of five songs total. After kicking things off with “Pray for Me” from the Black Panther soundtrack, he launched into a new song for roughly 30 seconds before segueing into “Blinding Lights”, his TikTok smash hit. From there, he was joined on the virtual stage by Doja Cat in avatar form (complete with a cat costume) for her “In Your Eyes” remix before concluding the concert with “Save Your Tears” from After Hours, his excellent new record and one of the best albums of the year so far.

For international viewers, “The Weeknd Experience” will be replayed on TikTok for throughout the weekend at different times. Exclusive merchandise for the concert is also available, with all proceeds benefitting the Equal Justice Initiative. You can grab that swag over at The Weeknd’s website.

Watch a fan upload of the virtual performance below.

Coronavirus may have crashed The Weeknd’s tour plans for the year, but it hasn’t stopped 2020 from treating him well otherwise. The Starboy singer released his best tracks yet on the After Hours deluxe edition, made his Netflix debut in Uncut Gems alongside Adam Sandler, and even shared a posthumous collaboration with Juice WRLD called “Smile”. Now, he can add his TikTok blowout to the list, too.