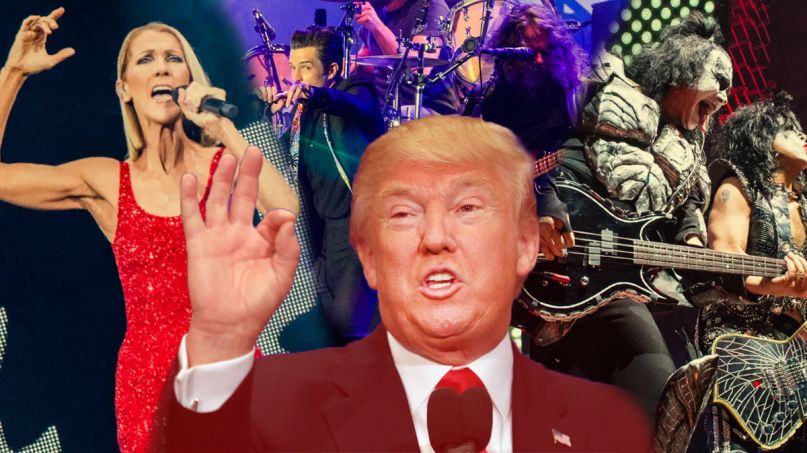 It’s no secret many musicians aren’t fans of Donald Trump — just look at the number of artists who have spoken out or taken legal action against him. It’s not surprising, then, that his 2017 inauguration featured bottom-barrel performances by the likes of 3 Doors Down, Toby Keith, and DJ Ravidrums. But if Trump had gotten his way, the relatively paltry crowd at the National Mall that fateful day would have been listening to The Killers, Celine Dion, KISS, Aerosmith, or even Meat Loaf.

The list of targeted performers comes from an excerpt from the new book Melania and Me, written by Stephanie Winston Wolkoff, a close friend and former Senior Advisor to First Lady Melania Trump. Shared via New York Magazine, the selection highlight’s Melanie’s indulgent attitude towards her husband, her bitter feelings towards Ivanka (whom she sarcastically calls “Princess”), Trump’s own ego, and the flabbergasting story of how John McEntee went from body man to top political advisor.

Mostly, though, it gives an insider’s look at how completely disorganized and disruptive the Trump transition team was. At one point, Wolkoff recalls scrambling to put together all the plans, including convincing Melania she couldn’t be called “First Lady-Elect” because no one had elected her. As for musical acts, she was working with Clive Davis’ son, Mitch, “trying to book some famous talent (we were hoping to book two or three acts from a list we’d drawn up featuring Aerosmith, Carrie Underwood, Celine Dion, Kelly Clarkson, Kiss, the Killers, Meat Loaf, Mavis Staples, Pat Benatar, and Lynyrd Skynyrd).”

Wolkoff recalled saying to Melania, “‘We don’t have any A-list performers locked in, or B-list for that matter… We don’t even have an office to work in!'”

Anyone shocked that a civil rights activist like Staples, a musician who sued Trump to stop using his music like Aeorsmith’s Steven Tyler, or a Canadian like Celine Dion didn’t end up playing 45’s inauguration? No? No one? Yeah, us either.

Meanwhile, Trump recently stopped using “You Can’t Always Get What You Want” as his walk-off music at political rallies because The Rolling Stones threatened to sue. Instead, POTUS is using “YMCA” by The Village People — who also don’t want him playing their music.