Trump Replaces The Rolling Stones’ “You Can’t Always Get What You Want” with “Y.M.C.A.” at Rallies 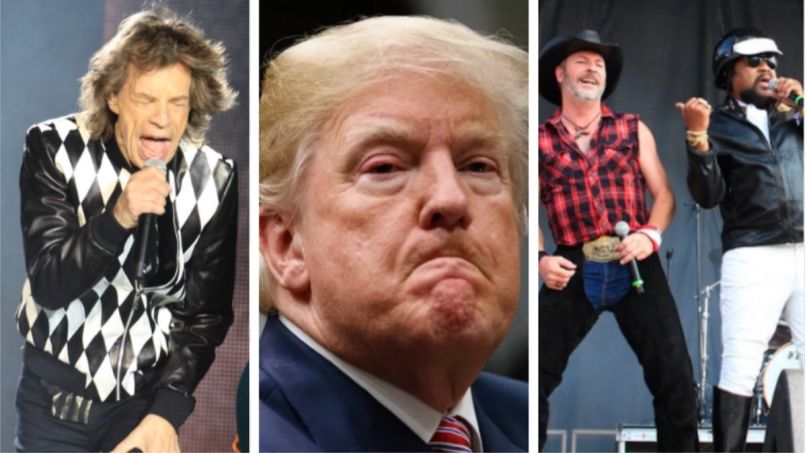 Donald Trump is running out of songs for his rallies. The White House’s current occupant continues to be sued by artists who don’t want him using their music, including The Rolling Stones, which has apparently left him with no option but to replace “You Can’t Always Get What You Want” with “Y.M.C.A.” as his walk-off song — even though Village People asked him to stop playing that exact song.

“Now that I have seen it a few times at various events, clearly The Village People’s ‘YMCA’ is now the walk-off song for the president replacing the Rolling Stones’ ‘You can’t always get what you want,'” tweeted Kelly O’Donnell, the White House Correspondent for NBC News.

The Rolling Stones have no sympathy for the devil, and neither does Victor Willis, the band leader of Village People. “I ask that you no longer use any of my music at your rallies, especially ‘Y.M.C.A.’ and ‘Macho Man,’” he said in June, following the George Floyd protests and Black Lives Matter marches. “Sorry, but I can no longer look the other way.”

While “Y.M.C.A.” is certainly a good choice for a festive event, it’s a mind-boggling one for Trump. The disgraced president has spent much of his time in the Oval Office constantly pushing for anti-LGBTQ+ policies. This past June, Pride month, Trump announced plans to roll back healthcare protections for transgender people.

There’s a good chance Trump is feeling blue and lonesome these days with nearly every popular musician speaking out against him. Taylor Swift recently slammed him for his “calculated dismantling” of the USPS, Neil Young sued him over copyright infringement, and Foo Fighters’ Dave Grohl penned an op-ed criticizing his COVID-19 response. Maybe Bob Dylan will come for him next considering the president’s latest campaign ad rips him off, too.

Now that I have seen it a few times at various events, clearly The Village People’s “YMCA” is now the walk-off song for the president replacing the Rolling Stones’ “You can’t always get what you want”