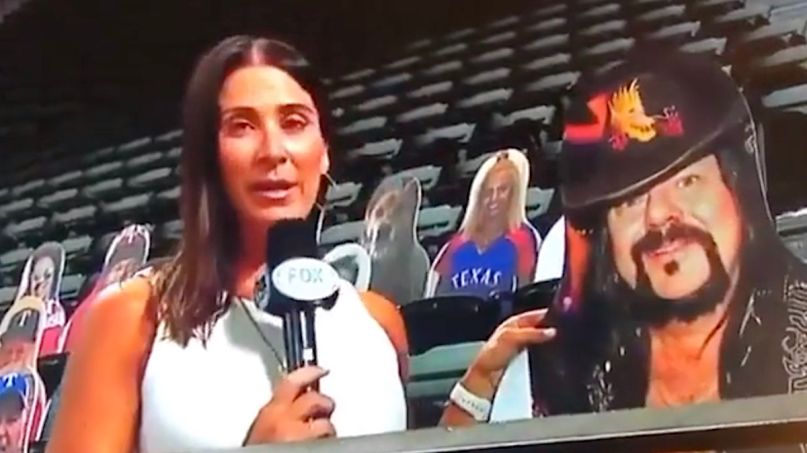 Over the weekend, a Texas Rangers game at Globe Life Park in Arlington was blessed with the spirit of Pantera. While spotlighting a cutout of late drummer Vinnie Paul in the stands, the team’s Fox Sports field reporter Emily Jones sang the guitar riff from the legendary metal band’s classic song “Walk”.

With no fans allowed at Major League Baseball stadiums due to the COVID-19 pandemic, several teams are filling up the seats with cardboard cutouts of photos sent in by fans. Just a couple weeks ago, we reported on a posthumous cutout of late Metallica bassist Cliff Burton’s father Ray appearing at a San Francisco Giants game.

On Sunday, Pantera’s Instagram page shared a clip from the game in which Jones was reporting from the stands. While holding up a cutout of Vinnie Paul, Jones commented, “Rock ‘n’ roll royalty here in right field, you guys! Not sure if you recognize this guy, but he is Vinnie Paul, drummer for the legendary band Pantera. Longtime Arlington resident, passed away in 2018, but one of his fans made sure he was in the house at Globe Life field to take in the Rangers this season.”

Jones went on to say, “You might recognize Pantera’s work when a guy walks,” before singing the riff to the band’s signature song, the Vulgar Display of Power favorite “Walk”. That was met with some confusion by the much-less-metal announcers in the booth, leading to some sarcastic back and forth banter.

While her singing attempt may not have done the late Dimebag Darrell’s iconic riff justice, kudos to Emily Jones for giving it a try, and paying honorable “re-spect” to the metal legends. Watch it all go down in the Instagram clip below, followed by the official music video for “Walk”.