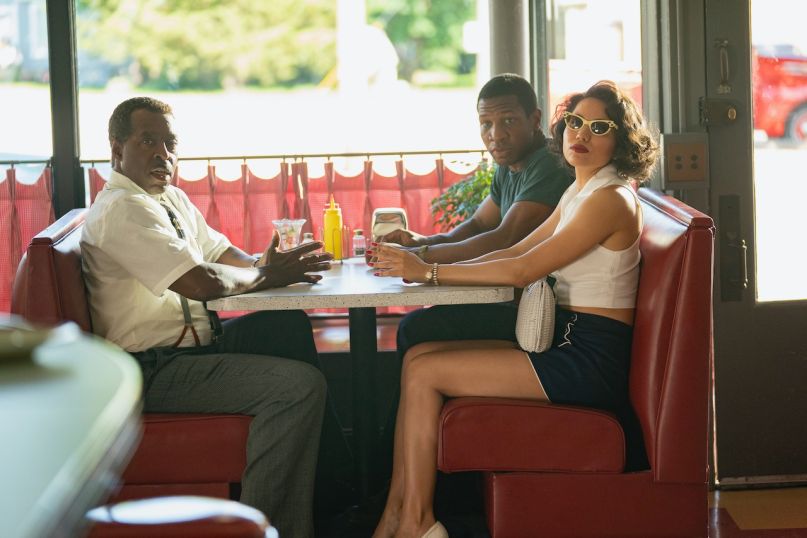 The Pitch: Lovecraft Country is a powerful story about chasing the American Dream. Created by Misha Green and Jordan Peele, the series blends together classic tales of horror from the likes of H.P. Lovecraft and Bram Stoker and sets them in 1950s Jim Crow America. Atticus Freeman (Jonathan Majors) has returned from fighting overseas to Chicago in search of his missing father, Montrose (Michael K. Williams). Beginning with a road trip to track down his whereabouts, Atticus, along with his friend Letitia (Jurnee Smollett) and uncle George (Courtney B. Vance), are pulled into a mysterious world of magic and monsters littered with deadly racial landmines. Loosely adapted from Matt Ruff’s novel, Green weaves stories of otherworldly creatures and powerful sorcerers with real instances of inequality and racial violence, wielding a terrifying adventure and a scathing commentary on America — both then and now.

The opening scene immediately sets the imaginative tone as Atticus dreams of fighting a military battle against both enemy forces and alien spaceships. A Princess from Mars descends from a flying saucer and a giant tentacled beast is split in gooey, green pieces by Jackie Robinson and his bat. This genre-blending mash-up is accompanied by narration from The Jackie Robinson Story, introducing audiences to a series that will smash the boundaries of status quo storytelling designed to coddle the dominant culture. Like the characters in his beloved pulp novels, Atticus goes on adventures with his friends and family. He travels through mysterious tunnels and unearths powerful relics. But what he is ultimately seeking is protection for those he loves as well as the same rights white people effortlessly enjoy every day.

Teaching Hard History: Last year’s Watchmen seemingly introduced white audiences to the Tulsa Race Massacre, a horrifying chapter in American history that has been intentionally forgotten. Lovecraft Country continues enlightening Americans about their own history (one sadly abdicated by mainstream education) by centering the story on the writing of the Safe Negro Travel Guide (inspired by the real Negro Motorist Green Book), pioneering in white neighborhoods and deadly sundown towns.

Green presents a character able to literally wear the skin of someone else, effectively commenting on the false assumptions that we rise up through life based on our accomplishments and hard work alone. We see the same character treated with respect when she is white and invisible (at best) when she is Black. Is it a little on the nose? Yes. Is it a relief to see these messages in the forefront rather than cleverly hidden to appeal to audiences who want their horror without politics? Absolutely.

Many Faces of Horror: And Lovecraft Country is most definitely horror, complete with ghosts, monsters, and murderers. The blood flies, the bodies splatter, and Green is not shy about showing any of it in gory detail. The fantastic effects recall early American horror but also remind us that none of this is a game. These situations are life and death for Atticus. But the human characters are ultimately the more terrifying monsters, and many scenes echo horrific hate crimes both current and historic. A Black teenager is nearly beaten for helping a white woman mirroring the tragic death of Emmett Till and the beginnings of the Tulsa Race Massacre. Characters are victimized by the police in an echo of the current Black Lives Matter movement. A particularly ominous scene involving a white woman lustily eyeing a Black man at a bar brings to mind Central Park Karen and the understanding that whiteness can and will be weaponized at a moment’s notice. As Green pits her characters against both fantastical monsters and insidious racists, she is able to show that there is really no difference between the two. A police cruiser following Atticus on a forest road is no less of a threat than the vampiric monsters lurking within the forest itself.

There are no white saviors here, but neither is there virtue signalling. Green’s characters are not perfect. Bolstered by fantastic performances across the board, they are living breathing humans who often struggle to do the right thing. Because when power is reclaimed, there’s a temptation to become the oppressor rather than to reset (or finally achieve) balance. Lovecraft Country expertly lets its characters wrestle with this complexity, exploring competing narratives and balancing justice with the understandable desire for revenge and need for catharsis. There are problematic moments, but Green smartly lets them unpack themselves. Atticus and his family do not lead lives centered around educating white audiences or being a perfect testament to their race. They are allowed to be human, living lives affected by but not revolving around racism.

Friends or Enemies: Through a twist on Robert Louis Stevenson’s The Strange Case of Dr. Jekyll and Mr. Hyde, Green directly takes on the failures of white feminism, voicing the tendency to play on connections to racism without acknowledging the huge amount of privilege white skin grants. These often opposing forces do share common ground, but one is in a position of power that the other does not have access to. Green also presents the idea of problematic allyship. Helpful white characters are quick to help Atticus and Letitia, but always with an ulterior motive, showing America’s track record (especially in politics) of using social justice as a smokescreen to garner support, then failing to actually deliver on the initial bargain.

The Music of Madness: Peele is no stranger to an effective needle drop, and Lovecraft Country is rich with modern tracks like Rihanna’s “Bitch Better Have My Money” and Dorinda Clark-Cole’s “Take It Back” with music of the time period like Dinah Washington’s “I Don’t Hurt Anymore”. Green chooses to reflect emotion and narrative arc over historically accurate artifacts. Non-traditional spoken word accompaniments such as Gil Scott-Heron’s “Whitey on the Moon” and audio of the Baldwin/Buckley debate over race and the American dream centers the narrative in African American culture while pointing a direct line to the vastly different experiences of white people.

Through a conversation about Edgar Rice Burroughs’ A Princess of Mars, Green comments on the experience of engaging with art created by and for the dominant culture as a person on the outside of it. To enjoy the story, Atticus must ignore the fact that the novel’s hero, John Carter, once fought for slavery. The history of American art is riddled with problematic characters, and H.P. Lovecraft himself was a known racist. I’m not sure if Lovecraft Country could be called a reclamation of these stories and characters, but it does expose how deeply racism is baked into American culture and the burden BIPOC must carry in order to engage with it.

The Verdict: Lovecraft Country is not for the faint of heart. Containing not only brutal and gory horror, but upsetting depictions of racism, it can be challenging at times. But the triumphs are hard fought and exhilarating, and art should be challenging. Good television shows us who we are and compels us to be better. It should also be noted that little of this commentary is new. Creators have been showing the horror of racism for decades, but as a highly anticipated series on one of the biggest premium channels, Lovecraft Country feels like an important step on the long road to on-screen representation. This is a picture of what America truly is — monsters and all — and it’s time to stop turning away.