Featuring a performance by Sam Fender 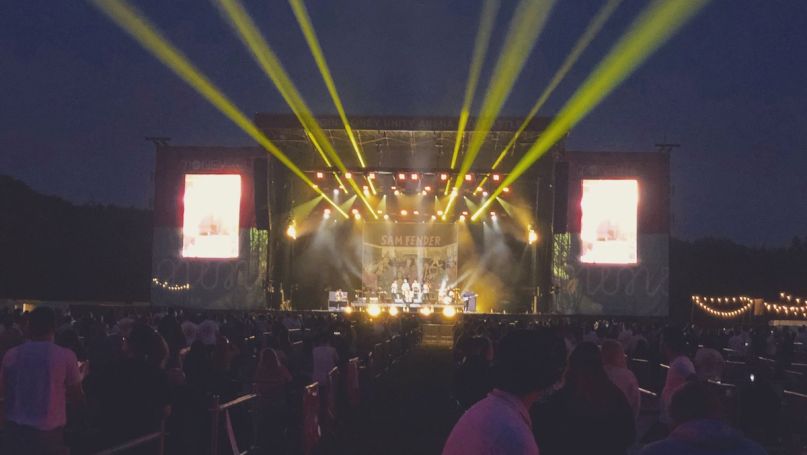 The UK’s new “socially distanced” outdoor music venue, the Virgin Money Unity Arena, hosted its first official concert on Tuesday night. Sam Fender played to a sold-out crowd in Newcastle, all of whom appeared to abide by the rules and regulations of the space. Watch footage from the show below.

Videos from the event reveal that it was safe and sensible, with the actual show itself going smoothly as planned. Fender played a 16-song setlist on the festival-sized stage, and it seems like it could be heard from the very last seats in the house.

“Big up Newcastle, big up Sam Fender!!!! We have just got home, I’ve drove over 8 hours today and it was all worth it!” tweeted attendee Jonathan Morgan. “I didn’t think I’d get to see the big man himself this year after my tickets for Birmingham were sold without me knowing and then Covid19. Today was just epic!!”

However, other fans continue to be skeptical, not because it’s unsafe, but because it detaches a concertgoer from the whole vibe of a concert to begin with. In several clips, people’s neighboring chatter is almost louder than the music, recreating the overall feeling of a detached music festival. “Love Sam Fender but if that’s what the future is, count me out,” tweeted Ashley Smith. “That’s not what gigs are for me. It’s the atmosphere of being surrounded by others captivated by what’s going on on the stage loving life.”

The Virgin Money Unity Arena will continue to host socially distanced concerts throughout the months of August and September. Upcoming performers include The Libertines, Supergrass, Two Door Cinema Club, and Van Morrison.

Meanwhile, here in the US, Live Nation’s CEO is confident concerts will be back in full swing by next summer, even if other other music executives believe 2022 is a more likely target. For now, though, most of the live music industry remains sidelined — with the exception of bands like Smash Mouth and Trapt, who continue to defy health experts guidance by playing shows in the middle of a pandemic.

Editor’s Note: Stay safe and pick up a custom face mask from Consequence of Sound. A portion of the proceeds benefit MusiCares’ COVID-19 Artist Relief Fund.

The UK’s first socially distanced gig is happening now in Newcastle with @samfendermusic headlining, and where attendees have their own private viewing area with 2m of space between them. Here’s what it looks like #samfender #unityarena pic.twitter.com/YBdxpAjYyi

More of Sam and the band tonight 🎉
©virginmoneyunityarena ig pic.twitter.com/9hGnxPjhOv

Big up Newcastle, big up Sam Fender!!!! We have just got home, I’ve drove over 8 hours today and it was all worth it! I didn’t think I’d get to see the big man himself this year after my tickets for Birmingham were sold without me knowing and then Covid19 🤷‍♂️ Today was just epic!! pic.twitter.com/fK4ve5P5oo

So this is a Sam Fender concert last night. Great that you can hear live music again. So why can’t non league football allow fans in. #LetFansIn pic.twitter.com/CSWVZYmReY

Love Sam Fender but if that's what the future is, count me out. That's not what gigs are for me. It's the atmosphere of being surrounded by others captivated by whats going on on the stage loving life..

Previous Story
Geddy Lee Is Closer to the Heart of Toronto Blue Jays Game, Thanks to Cutout of Rush Legend
Next Story
New Garbage Album is Recorded and Coming Out in 2021
Popular
More Stories
[fu-upload-form form_layout="media" title="Submit Your Photo"][input type="hidden" name="ugc" value="1"][/fu-upload-form]