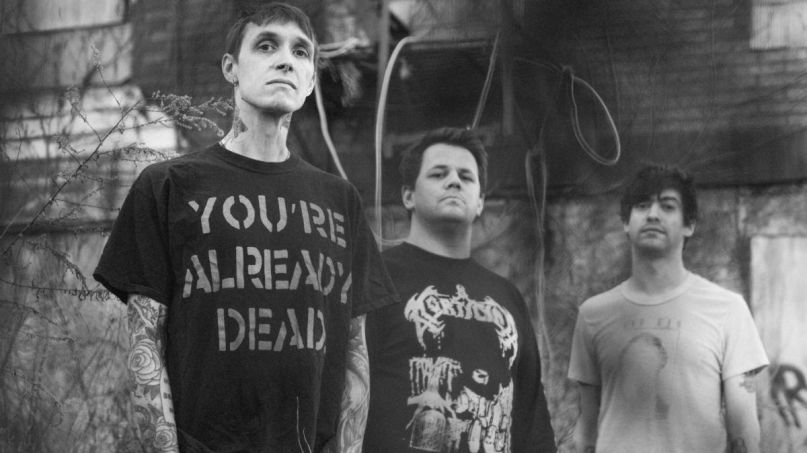 “Shame” follows on the heels of previous single “Delco”, showcasing the idiosyncratic blend of heavy music Uniform have honed for their latest LP. John Carpenter-style synths build into a crushing blast of electronic and live instrumentation. It’s not quite metal or industrial or hardcore, though there’s subtle elements of each.

Vocalist Michael Berdan stated, “‘Shame’ is the song that sets the thematic tone for the rest of the record, which seems appropriate for a title track. It is a portrait of someone riddled with regret in the process of drinking themselves to death. Night after night they sit in dark reflection, pouring alcohol down their throat in order to become numb enough to fall asleep.

He added, “I took inspiration from a few stories of alcoholic implosion, namely Sam Peckinpah’s Bring Me the Head of Alfredo Garcia and John O’Brien’s Leaving Las Vegas. The line ‘That’s why I drink/ That’s why I weep’ appears in homage to Rod Sterling’s Twilight Zone episode ‘Night of the Meek’.”

The track’s deeply personal sentiments echo those of “Delco”, which Berdan described as autobiographical: “Getting older and attempting to reconcile with personal demons surrounding depression, anxiety, and substance abuse has forced me to take a long, hard look at my childhood.”

As for the live instrumentation, Shame is the first Uniform album to feature drummer Mike Sharp, who’s presence is felt on the title track’s crushing buildup. The band produced the recordings with Randall Dunn.

Pre-order Shame via Sacred Bones or Amazon. Stream the title track below.