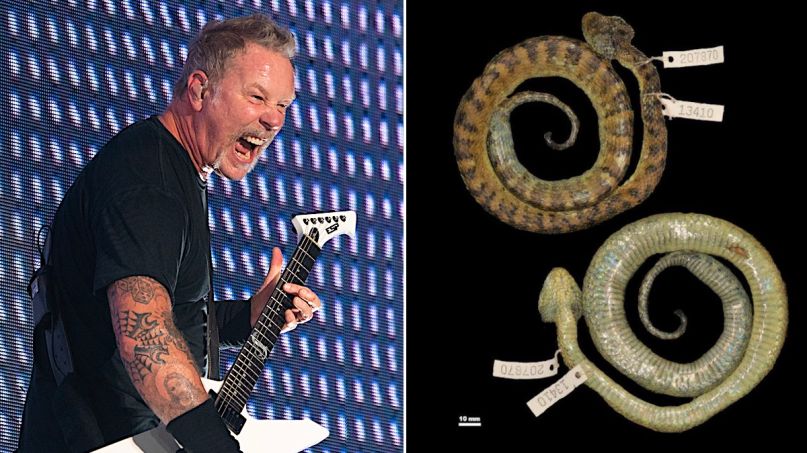 Pretty soon, Metallica are going to need to open their own aquarium to house all the species named after them. A newly discovered venomous snake species has been named after frontman James Hetfield just months after a mysterious deep-sea creature was named after the band.

The snake, a species of bush viper, has been dubbed Atheris hetfieldi. It was discovered at Bioko Island in the Gulf of Guinea by a team of Portuguese and American scientists, led by metalhead Luis Ceríaco.

According to the official finding, “The newly described species presents a series of morphological characters that clearly differentiate it from all of its congeners.” We’re not really sure what that means, but we’re guessing the snake often screams “Yeahhh” while spewing out mighty serpentine riffs.

In all seriousness, a further description from Ceríaco makes more sense, describing the snake’s “triangular-shaped head and strongly-keeled scales, which gives them a dragon-like appearance, which certainly is consonant with the image of a singer of a Heavy Metal band.”

In an interview with Metal Hammer, Ceríaco said, “Both me and Mariana Marques, the second author of the paper, are big fans of Metallica and James Hetfield since a very young age. We wanted to honor him, as a thank you for all the good vibes his music has transmitted to us during all of our personal lives and careers. Also, we think that a mysterious venomous and cool-looking snake, who lives in the base of a volcano lost in the middle of the tropical forest is very relatable to heavy metal!”

He continued, “On another hand, naming a new species after someone as James brings more attention to the much needed biodiversity studies and field surveys. We are in race against the extinction of a large proportion of the world’s biodiversity, and many species may go extinct before we even know they exist!”

Metallica and snakes have a history, with the song “Don’t Tread on Me” inspired by the words on the Gadsden flag, which contains an image of a coiled snake. That snake image also appears on the cover of “The Black Album”.

As mentioned, back in February, a newly discovered deep-sea crustacean was named Macrostylis metallicola by another team of metal-loving scientists.

News of the Hetfield snake comes on the same day Metallica released the new live album and concert film, S&M2, which documents the two shows the metal legends played with the San Francisco Symphony last year.