The satirical character has been in semi-retirement since 2006 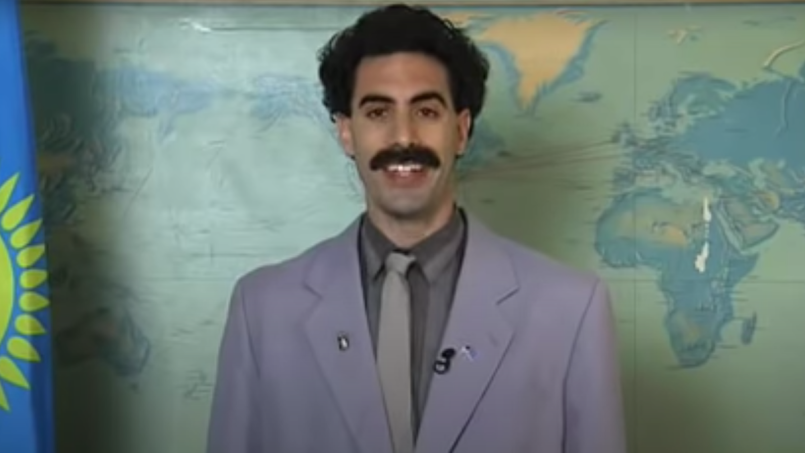 Dust off your outdated stereotypes, because Sacha Baron Cohen‘s most famous creation is back. The comedian and provocateur was recently spotted filming in California while wearing Borat Sagdiyev’s trademark mustache and grey suit.

TikToker @alexandheir took the video while driving in Long Beach, CA on Sunday. Cohen sat behind the wheel of a rusty yellow truck, as a film rig towed him down the highway. The short clip takes in the camera crew and catches a frustrated Borat trying to take off his sport coat.

The fictional Kazakh journalist first gained prominence as the breakout hit of Cohen’s Da Ali G Show (2000, 2003-04). Borat was certainly offensive to the people of Kazakhstan, but he hit the target more often than not as a satirical arrow aimed at the racists, misogynists, and homophobes of the English-speaking world. Cohen would introduce himself to real people as a journalist sent by Kazakhstan’s government, and would then make the most outrageously offensive claims, just to see who agreed with him. It wasn’t elegant or pretty, but if you believe that art is a hammer meant to shatter reality, then Borat was one of the heaviest hammers of his day.

The 2006 feature film Borat: Cultural Learnings Of America For Make Benefit Glorious Nation Of Kazakhstan, vaulted Cohen and Borat to international superstardom. The film turned into a blockbuster hit, and soon every frat boy and edgelord in the world was saying, “My wife!” Afterwards, Cohen sent the character into semi-retirement, preferring to focus on other creations such as Bruno and The Dictator. Borat was last spotted in 2018 on Kimmel trying “to swing the midterms for Premier Trump.”

For now, little is known about Borat’s return, other than what was caught in the video. Perhaps it’s the long-discussed Borat 2, another segment for Jimmy Kimmel Live, or something else entirely. See for yourself below.

So far this year, Cohen has returned to his provocateur roots. In June, he infiltrated a far-right rally pretending to be a racist country singer, and in July he pranked Rudy Giuliani so badly he called the cops.

Previous Story
The Avalanches Head to Space in Cosmic New Video for “Wherever You Go”: Watch
Next Story
Scotland Bans Music in Bars to Prevent “Leaning in to Talk”
Popular
More Stories
[fu-upload-form form_layout="media" title="Submit Your Photo"][input type="hidden" name="ugc" value="1"][/fu-upload-form]