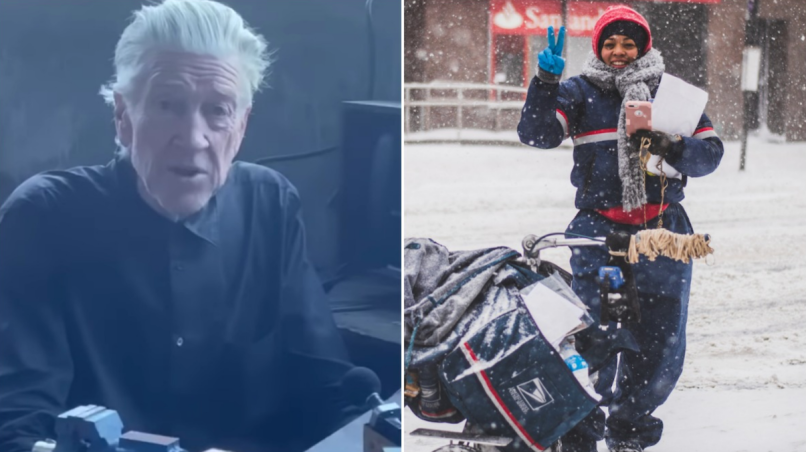 David Lynch recently brought back his eccentric yet delightful weather report videos after a nearly 10-year hiatus. While most feature Lynch’s meteorological assessments — the “wispy clouds” and “golden sunshine” of the day — recent entries have also touched on important social issues.

In one of his videos from June, the Blue Velvet and Twin Peaks auteur featured a sign supporting Black Lives Matter. Lynch’s latest weather report includes a brief tribute to the United States Postal Service, whose very existence is currently being threatened by Donald Trump and his administration.

In the short clip posted Monday (August 17th), Lynch slipped his USPS comment in between his usual daily climate talk. “Very still right now, around 73 degrees Fahrenheit, 23 degrees celsius,” he said. “Today, I’m thinking about the postal workers and how much we need and appreciate them.”

After a short pause, the iconic filmmaker focused right back on the weather just outside his window, noting the predicted high 80s temperatures and “blue skies… all along the way.” Watch Lynch’s video below.

Republican senators and the White House have rejected a $25 billion emergency funding request for the USPS. Trump has spoken out against the postal service agency for years now, calling it a “joke” and a “delivery boy” for Amazon. His newest reason to defund the postal service has to do with mail-in voting and how it could supposedly lead to rampant voter fraud. Nancy Pelosi announced she’s calling the House back to sessions from their summer recess to vote on the Delivering for America Act, and an emergency oversight hearing is set for August 24th.

While on paper it sounds like Trump is just looking out for voters come November, many see it for what it actually is: a ploy to sabotage the election by taking away mail-in voting options. Taylor Swift read the manipulative writing on the wall over the weekend and promptly called out POTUS.

“Trump’s calculated dismantling of USPS proves one thing clearly: He is WELL AWARE that we do not want him as our president,” she wrote in a tweet. “He’s chosen to blatantly cheat and put millions of Americans’ lives at risk in an effort to hold on to power.”