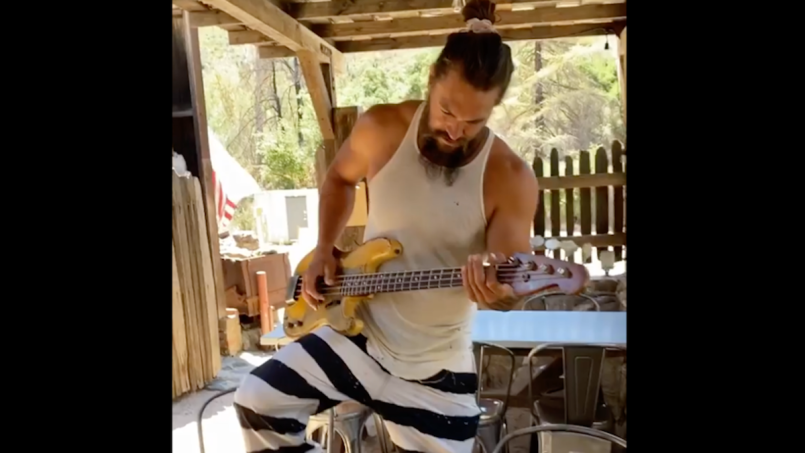 Jason Momoa turned 41 earlier this month, and he celebrated his birthday with a lot more than just cake. As Guitar World points out, the Hollywood superhero was given a special custom-made Fender Precision Bass, which he then used to cover Red Hot Chili Peppers.

The Aquaman and Game of Thrones actor posted an IGTV video capturing the whole birthday event — from the gifting presentation by Fender’s Custom Shop Master Builder Vincent Van Trigt to his own mini performance. Specifically, Momoa played a few of Flea’s bass arrangements from RCHP’s version of “Higher Ground”, which was originally written by Stevie Wonder. We should add that he was adorably giddy the entire time.

Momoa is no bass newbie, of course. The actor actually picked up the instrument in 2015 while filming Aquaman. As the story goes, he wanted to pass the time on set by jamming with co-star Patrick Wilson, whom he described as “awesome on the drums.” “There’s a bunch of stuff I want to learn. Instead of waiting around on set all day, I’d rather be learning something cool,” he told Men’s Health at the time.

Coincidentally, during that same interview, Momoa also pulled out a Fender bass and foreshadowed his RHCP cover:

“Look at this thing, man!” he says, strapping on a Fender bass. “This thing is so fuckin’ badass!” He plugs in, flicks on an amplifier, and gives a groovy demonstration of his new creative outlet. Using his thumb and fingers against four strings, Momoa plays in a pop-and-slap style that’d sound at home on a vintage Red Hot Chili Peppers record.

For more of music-driven Momoa, revisit his recent impression of Ozzy Osbourne. Also catch the actor in Denis Villeneuve’s Dune, which is scheduled to open in theaters December 18th. Momoa was also recently cast to star in a live-action version of Frosty the Snowman.