In a call-back to her famous "Wrecking Ball" video, she straddled a swinging disco ball 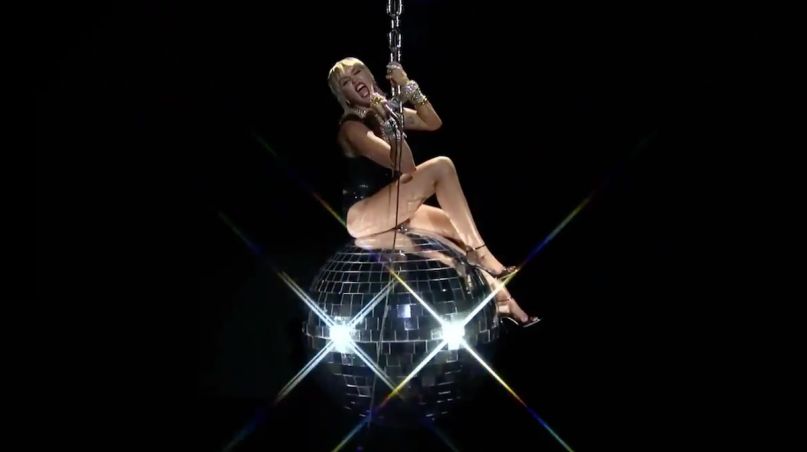 Ever since 2013, Miley Cyrus has been known to stage memorable, jaw-dropping awards show performances. That was certainly the case on Sunday night at the 2020 MTV VMAs, where the pop star rolled out the live debut of her new single “Midnight Sky”.

Channeling the track’s self-directed music video, Cyrus flaunted a glitzy biker chic aesthetic as she sang “Midnight Sky” from a brightly lit soundstage. In a call-back to her famous “Wrecking Ball” video, Cyrus concluded the performance by ascending a flight of stairs and straddling a large swinging disco ball. Watch the video replay below.

The 27-year-old recently revealed that her long-teased She Is Miley Cyrus project — a compilation of three six-song EPs — has been put on hold. In an interview with Zane Lowe on Apple Music, Cyrus explained that “Midnight Sky” came about while she was brainstorming the video for a different song. When she eventually shifted gears to make the visual for “Midnight Sky”, she saw it as a moment to reclaim her narrative after a very public divorce from Liam Hemsworth, vocal cord surgery, and finding sobriety (and the life-altering reality of the pandemic). That meant focusing on new material instead of following through with her original She Is Miley Cyrus plan.

Cyrus, whose last album was 2017’s Younger Now, is next expected to feature on Dolly Parton’s upcoming Christmas album.

Hosted by Keke Palmer, this year’s VMAs were originally supposed to take place at the Barclays Center in Brooklyn. However, due to the ongoing pandemic, the evening’s performances were filmed with “limited or no audience” at different locations across New York City. Other performers tonight included Lady Gaga, The Weeknd, and BTS.