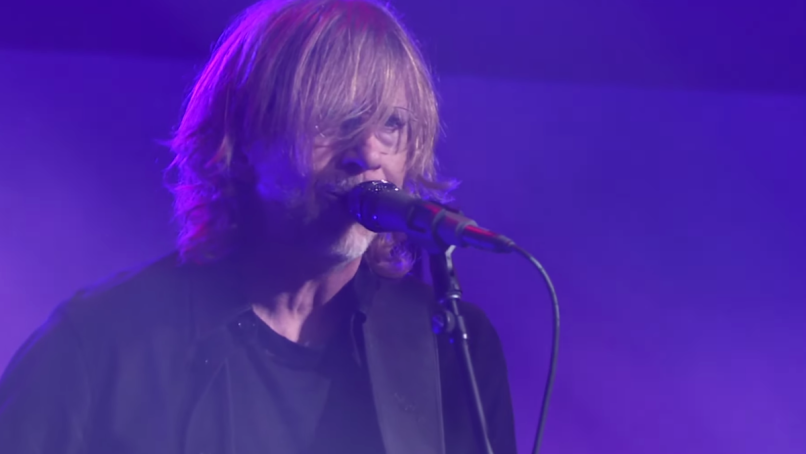 Trey Anastasio just became late-night TV’s first in-studio guest since production was shut down in March due to the coronavirus. The Phish frontman performed “I Never Needed You Like This Before” with The Roots on The Tonight Show on Tuesday.

“First live in studio guest for us,” host Jimmy Fallon tweeted. “All done safely and carefully. We are so psyched!!! Tonight!!” According to Rolling Stone, Anastasio arrived at New York City’s Rockefeller Center alone and was subjected to a COVID-19 test before being allowed on set. Rather than the usual Tonight Show studio (6B), the veteran rocker was taken to Conan O’Brien’s old studio (6A) because it allowed for easier social distancing amongst the program’s cast and crew.

For the actual performance, Anastasio and The Roots rocked side by side while blanketed in purple and pink lights. Perhaps this writer is just starved for live music, but it sincerely looked like everyone was truly vibing and so happy to be doing so while in the same room together (not through like, uhh, Zoom). When Anastasio and Questlove played off each other’s energy during the instrumental bridge, it damn near felt magical.

Anastasio gushed about his IRL appearance, telling Pitchfork, “I’m still buzzing after playing with The Roots. Man, I needed that. I don’t know what was better, feeling Questlove’s drums shaking my whole body or watching the crew in the back of the room dancing around while we played.”

Replay the full performance below.

“I Never Needed You Like This Before” is off Lonely Trip, Anastasio’s new solo album written and recorded entirely while in quarantine in NYC. The full-length isn’t the only project to come from Anastasio this year. In April, he and the rest of Phish dropped their 15th studio effort, Sigma Oasis.

Although in-studio guests are now permitted on Fallon, episodes are filmed without audience members and with strict social distancing requirements in place. While The Tonight Show operated remotely the last few months, artists such as Angel Olsen, Weezer, Michael Stipe, and Alanis Morissette turned in performances shot from their own respective quarantine spaces.

First live in studio guest for us. All done safely and carefully. We are so psyched!!! Tonight!! https://t.co/DCjEnlxJn5