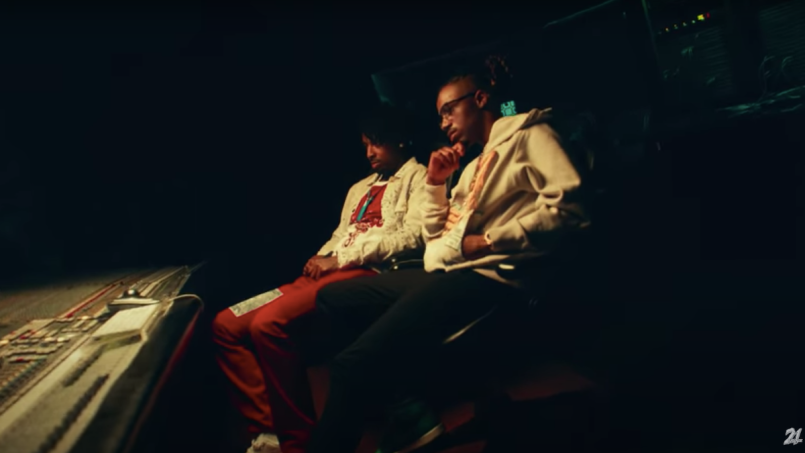 21 Savage and Metro Boomin have announced Savage Mode 2, the follow-up to the 2016 trap blockbuster Savage Mode. The sequel arrives this Friday, October 2nd, and in the anticipation, the duo have shared a trailer narrated by none other than Morgan Freeman.

The original EP came at a pivotal time in both men’s careers. Metro Boomin was 22 years old and already had half a dozen big hits under his belt. He may have been an in-demand beat-maker, but everybody knows Metro Boomin wants some more, and the collaboration with 21 Savage allowed him a chance to executive produce and expand his empire. As for Savage, he was a 23-year-old rising rapper in Atlanta with a pair of mixtapes to his name. After the co-sign from Metro Boomin, he became a star almost overnight.

The Savage Mode 2 trailer shows the two artists in the studio, stalked by a pair of deadly assassins. Freeman’s mellifluous narration offers a definition of Savage Mode. He says,

“‘Savage’ is defined as fierce, beastly, and untamed. ‘Mode’ is defined as a way of operating or using the system. So to be in ‘Savage Mode’ is to go hard, not allowing anything to stop or deter you from your mission. Basically, this means when someone is in Savage Mode, they are not to be fucked with.”

Watch the trailer below. The album drops October 2nd, and pre-orders are off and running. 21 Savage’s last album was 2018’s I Am > I Was. Earlier this year, he appeared on Childish Gambino’s 3.15.20 and Lil Uzi Vert’s Eternal Atake Deluxe Edition.

Previous Story
Lil Yachty Arrested for Driving More Than 150 Mph
Next Story
Public Enemy Are Mostly in Full Effect on the Rallying What You Gonna Do When the Grid Goes Down?: Review
Popular
More Stories
[fu-upload-form form_layout="media" title="Submit Your Photo"][input type="hidden" name="ugc" value="1"][/fu-upload-form]