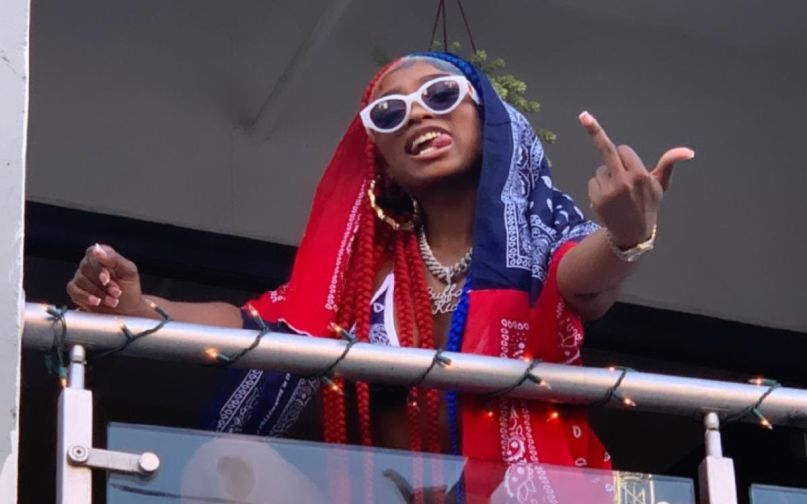 Caesar became the first female rapper signed to Griselda last March. But her roots in the collective go back over a decade, to a time when DJ Shay mentored her alongside other Buffalo, NY artists including Westside Gunn, Conway the Machine, Benny the Butcher, and more. Later, Westside Gunn would found Griselda, and DJ Shay became one of the label’s most trusted producers. But Caesar was not forgotten, and Shay helped bring her into the Griselda fold before he died of COVID-19 last month.

Griselda has always had one foot in the past — the Record label prizes grimy throwback beats and makes a conscious study of the master rappers who came before. In the statement announcing The Liz Tape, WG framed the decision to sign Armani Caesar as part of that same tradition. “It’s funny how people talk abut Armani like I just found her and she don’t belong in her spot and shit was given to her not knowing she a product of DJ Shay, ” Gunn said. “He signed her 11 years ago, she had to rap with the best of the best as the ONLY female. This wasn’t overnight, that woman really cut from our cloth.”

Caesar herself expanded on those themes, emphasizing her debt to DJ Shay and her long study of rap music. She said,

“I’m dropping The Liz for the culture. For all the people that grew up loving hip hop for the art of it not just the beats. I’ve studied this and I’m so proud of this body of work. I want to dedicate this to Demetrius “DJ Shay” Robinson. The first person to ever take a chance on me musically. He believed in my talent long before anybody else knew my name. There would be no “Armani Caesar” if it hadn’t been for him. So I’m doin this one for Shay. I hope it makes him proud.”

The core Griselda regulars all guest on The Liz Tape, with one appearance each from Conway and Gunn, and two from Benny the Butcher. Production was handled by JR Swiftz, Camoflauge Monk, 808 Mafia, Bone8, Animoss, StinDrms, and of course the turntable titan himself, DJ Premier.

Preemo announces himself immediately on lead single “Simply Done”, with scratches and a sample of Queen Latifah’s “Inside Out”. Caesar launches into a funky flow with each a percussive double rhyme in the middle and end of each line: “My n—– sharpshooters, aim and click, I ain’t talkin’ no Twit’ pic (Brr)/ I get in that booth and I rip shit (Uh-huh), no playin’, no kid shit.” Benny the Butcher leans back into a conversational, deceptively simple rhyme scheme, popping off threats and stunting on the beat. The new music video is quarantine simple, and comes from director DNTWATCHTV. It shows the two MCs rapping their asses off in front of a colorful backdrop, interspersed with snapshots and short cutaways. Check out “Simply Done”, and feast your eyes on the tracklist and artwork for The Liz Tape, below.