Beyond the Boys’ Club: Orianthi 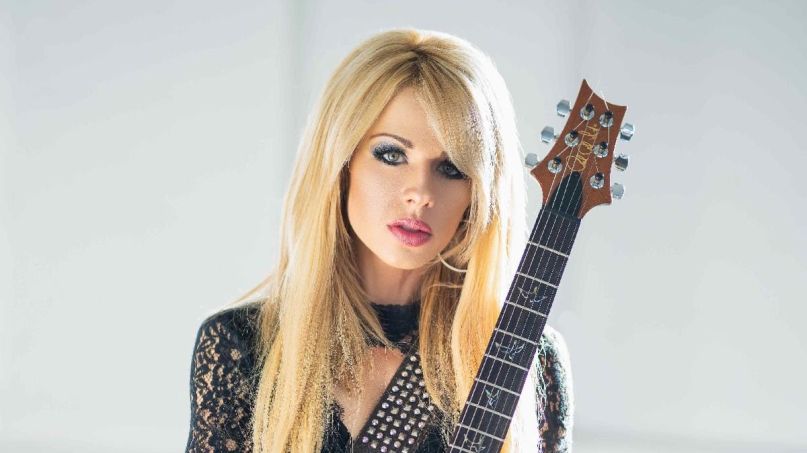 Beyond the Boys’ Club is a monthly column from journalist and radio host Anne Erickson, focusing on women in the heavy music genres, as they offer their perspectives on the music industry and discuss their personal experiences. This month’s piece features an interview with acclaimed guitarist Orianthi.

Australian guitarist, singer, and songwriter Orianthi has performed with some of the biggest acts in the world, from Michael Jackson to Alice Cooper.

Back in 2009, Orianthi was knee-deep into rehearsals for Michael Jackson’s “This Is It” tour, but sadly, Jackson passed away before the tour could come to fruition. That same year, she scored a solo hit with “According to You”, and she went on to join Alice Cooper’s band for two world tours. Now, Orianthi keeps busy with her own solo music and plenty of sessions and other projects.

On November 6th, Orianthi will release her new solo album, O, which she wrote and recorded with acclaimed producer Marti Frederiksen. She checked in with Heavy Consequence for the latest “Beyond the Boys’ Club” column to discuss the upcoming album, working with Nikki Sixx and Alice Cooper, the trend of more young girls picking up the guitar, and more. Read the full interview below.

On what made now the right time to release O, her first new studio album in seven years

It just felt like the right time. I actually made this record a year ago, so it took a while to put it together with the release, and then with everything that happened at the beginning of this year. We were going to release it earlier, but the wild way it went, we had to wait. But, the past seven years or so, I’ve been doing a lot of different things like collaborating with different artists and doing songwriting and sessions and all that kind of stuff. So, I’ve been working and very busy, just doing different things. But, it just felt like the right time for me to go to Nashville and reconnect with a great friend of mine, Marti Frederiksen. He’s an incredible producer and songwriter. The first song we wrote was “Rescue Me”, and it just sort of felt right. I’m like, let’s make a record together! it was so much fun to make it in 28 days.

On if making the album in 28 days gave it a more live, spontaneous feel

We wanted to keep it really raw, and that’s definitely what we went for with this album. Just keeping it raw or real, and hopefully people will want to see it live. So, with the whole album, it wasn’t overthought and wasn’t overproduced. Marti is such an incredible talent as a writer and producer and everything, and we had a blast making this record together.

On Nikki Sixx’s involvement with O

Nikki Sixx from Mötley Crüe wrote the lyrics with us for “Streams of Consciousness,” and I’m really proud of that song. I’m a big fan of him and everything he’s done, and he’s such a great writer. It’s funny, I was supposed to go on the Mötley Crüe tour with Alice Cooper, and I actually left just before that tour to join RSO with Richie Sambora, but I got to know Nikki afterwards with his wife. We got to hang out at the Hollywood Bowl at a show and just started talking and chatting about music and that kind of stuff. They’re lovely people, and we just exchanged numbers. I was actually texting his wife and saying, “Hey, I’m making this record with different collaborators and whatnot, and if Nikki’s down to write something, it’d be great.” He wrote me back and said that he absolutely wanted to, and I was blown away. I was like, “That’s amazing.” Then, he sent me these wild lyrics for “Streams of Consciousness,” and he painted such a cool, dark picture of the L.A. Hollywood scene, and we just wrote the music around it in the melody and everything and added some lyrics. But, ultimately, I was just blown away. He’s such a great writer.

On what made the album’s first single, “Sinners Hymn”, an appropriate track to release first

It was kind of a weird situation, because I actually thought “Contagious” was going to be the first single, but considering everything that’s going on in the world right now, that probably would not be a good single. So, “Sinners Hymn” has got that grit, too, and it’s pretty heavy, and people are going, “Oh, that sounds a bit like Nirvana meets Hendrix.” I’m going, “Cool!” We weren’t going for anything, so when we wrote the song, it just kind of happened organically. I was thinking a lot about Buddy Guy and listening to a lot of ZZ Top and Nine Inch Nails, so ’90s kind of stuff. So, the comments — I read some of them on YouTube, and some people are saying Nirvana meets Hendrix, and that’s cool and awesome, but we were really just trying to mold different sounds that fit the lyrics. We wanted to make you feel something different with every song.

I had a blast with Alice. That was honestly a high in my life. It was the most amazing time, and their families are my family forever. I learned so much from him. He’s incredible entertainer and such a great person. His whole family, his wife, kids, everybody in the band — they’re my brothers. He taught me a lot. I became a better performer after working with him. I became a better guitar player in all aspects. He made me lift my game a lot. We stay in contact all the time.

On what she’s hearing regarding traditional concerts being back

I’m hearing so many mixed things. I don’t know. All I can say is that when things are safe, and when things feel right, they’ll be back, but I just don’t know yet. The feeling is that live streams are going to be the way for a minute, and then maybe outdoor shows are going to come back, because I think the outdoor stuff is going to be far easier to control with the masks and the distancing and situations like going through getting temperature checks. Maybe you’ll even have to show a form that you tested negative. I don’t know how they’re going to go about it, but this is just the way that I’m looking at it from my standpoint.

You want to put on a show, and you want people to have a good time and go home know they had a great time. You don’t want people going home and getting sick. That would be the worst thing. I think as musicians, we’re here to provide entertainment and a good time for people, not a bad time. As musicians, playing is our livelihood, but at same time, safety is a huge thing. It’s on everyone’s minds.

Oh, yeah. There are so many. It’s changed drastically, because when I first came to NAMM, I think I was 19 years old, and there were hardly that many guitar players that were women. I was the odd duck. It was kind of a gimmick thing or something, like, “Oh, you play, heh?” It’s crazy to think of that.

I think there’s a lot more support. I really do. I feel that women are coming together. I feel like there are more guys supporting women, too. I think that just being treated as an equal and not like it’s a man’s world kind of situation. The industry is still very male dominated, but at the same time, it’s about working together. It’s so good to have a male perspective, but it’s so great to have a female’s perspective, too. It’s so great to come in the middle. For me, I see it more and more now where guys are supporting a lot more women doing guitar playing and that kind of stuff, too.

I’ve got so many messages saying, “Oh, you inspired me when I was little to pick up guitar, and I’ve been playing that for so many years,” and it’s such an awesome thing. To be given that platform to work with Michael Jackson and Alice Cooper and all the people I’ve worked with, these opportunities that I was prepared for, because I worked really hard before that. I worked tirelessly and joined three cover bands and played in pubs, just worked and worked and worked. So, I felt like I earned it. But, I also felt very, very grateful for the opportunity when it came my way. But, to be onstage with those people, I was able to inspire other girls to follow their dreams and do what they want to do. You should always put yourself out there and do your best and try to inspire others. Never try to dim your light. I think we’re all supposed to be the best at what we can do individually. My best is different from somebody else’s best, and I think that once you start comparing yourself to other people, that’s the worst thing you can do. You just have to keep on trying to better yourself.

This industry is probably one of the hardest, I would say. Between music and acting and the entertainment field, it’s not easy, and the music industry is getting even harder, because it’s harder to make money with everything that’s going on with streaming and all that. But, it’s also a time when you have to be really creative with the way you market yourself and do everything. So, if you’re into it, and if you love creating and expressing yourself and being a songwriter, then music is your calling, so just never give up. Never let anyone tell you, “That’s not what you should be doing,” because you know and feel inside yourself that it’s a calling.

Our thanks to Orianthi for taking the time to chat with us for this month’s “Beyond the Boys Club” column. Pre-order her new album, O, here.