In an accompanying video, Borat proclaims: "Because of Trump 350 million Americans still alive!" 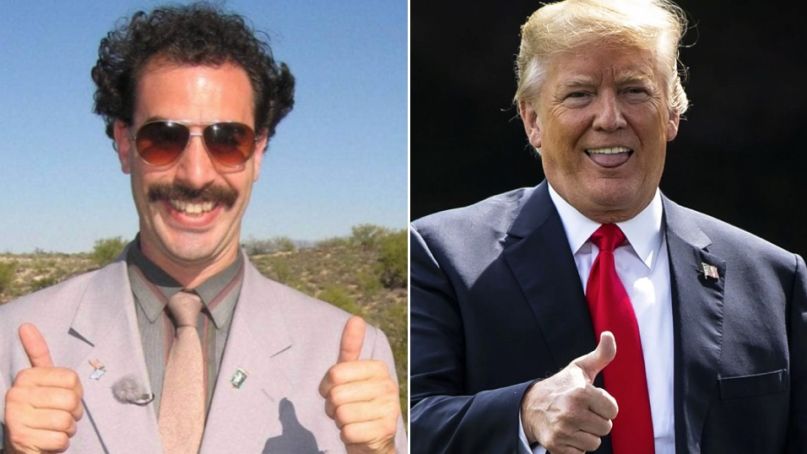 By all accounts, last night’s presidential debate was an absolute shit show, derailed by a megalomaniac whose caked-on face paint melts as soon as he exits the bubble of MAGA sycophants and comes face to face with the cold hard truth that his abject failures as president have spurred on three simultaneous pandemics: COVID, an economic recession, and racial unrest. Even his biggest supporters at Fox News agree that Trump did himself no favors when he interrupted Joe Biden over 300 times in the span of 90 minutes or insulted Biden’s dead son.

Still, Trump still has a few truthers in his camp. Take, for example, noted Kazakh journalist Borat Sagdiyev, who delivered a message of congratulations to Trump through the Republic of Kazakhstan’s Twitter account. “Congratulations to great friend of the Kazakh people @realDonaldTrump for winning debate today!” wrote Borat in a tweet posted 30 minutes before the debate actually took place. “Impressive and amazing result for a strong premier who always put America and Kazakhstan first!”

In an accompanying video, Borat advocates for “the strongest premier in history!” by ticking off a series of Trump’s most admirable qualities: “He’s not racist… Black guys love him so much they kneel before him”; “Trump never had stroke”; “He protector of women”; “He hero of war”; “Biden’s breath so bad he forced to wear mask”; “Because of Trump 350 million Americans still alive!”; “Trump never had stroke!” In conclusion, Borat proclaims, “Vote for Trump or be crushed!”

By the sound of it, this is only the beginning of Borat’s public relations campaign in support of Trump’s reelection. Next month, he’ll return with with Borat Subsequent Moviefilm: Delivery of Prodigious Bribe to American Regime For Make Benefit Once Glorious Nation of Kazakhstan, a new feature-length film streaming on Amazon Prime.

Congratulation to great friend of the Kazakh people @realDonaldTrump for winning debate today! Impressive and amazing result for a strong premier who always put America and Kazakhstan first! pic.twitter.com/qLljQ8b5UU