Another 260 people have tested positive for coronavirus 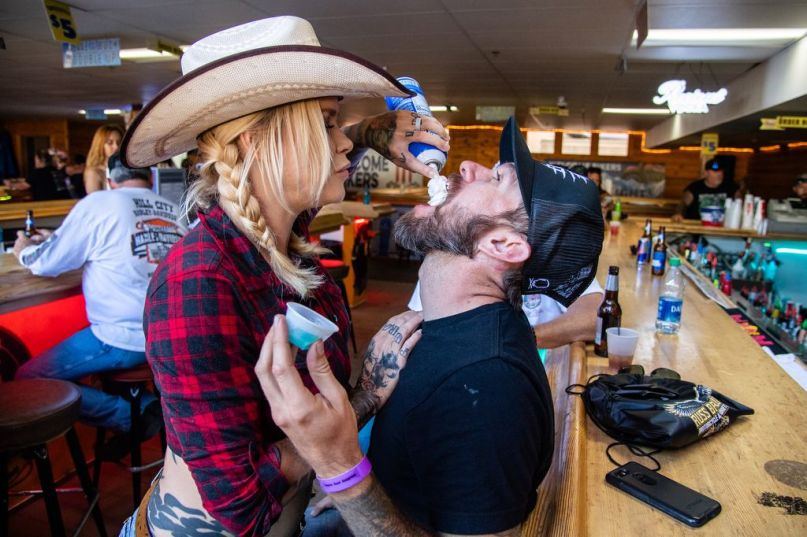 A bar patron receives a jello shot with whipped cream at One Eyed Jacks Saloon during the 80th annual Sturgis Motorcycle Rally on Friday, Aug. 14, 2020, in Sturgis, S.D. (Amy Harris)

A Minneapolis man who attended the Sturgis Motorcycle month has died of COVID-19, according to NBC News. It’s the first death linked to 10-day biker festival, which drew more than 460,000 attendees to Sturgis, South Dakota last month.

The man, said to be in his 60s, was hospitalized and placed in intensive care upon his return from Sturgis, according to the Minnesota Department of Health, which confirmed his passing on Wednesday.

An additional 260 positive cases across 11 states have been directly linked to Sturgis, though epidemiologists believe the true number is much higher. They cite the resistance of some rallygoers to testing and the limited contact tracing in some states as the reasons for the undercount, according to The Washington Post. As such, the true number of infections stemming from Sturgis will likely never be known.

Sturgis’ flagship event, the Sturgis Buffalo Chip, staged nightly concerts featuring the likes of Smash Mouth, Trapt, Buckcherry, Reverend Horton Heat, 38 Special, and Drowning Pool. Organizers encouraged its attendees to follow CDC guidelines as it pertained to the pandemic. They promised that hand sanitizer would be readily available throughout the park, and that guests would be required to have a mask with them upon entering the amphitheater.

However, photos and video from the Buffalo Chip showed few people wearing masks or practicing social distancing. One of the event’s headlining musical acts, Smash Mouth, even seemed to mock the pandemic, yelling out at one point, “Fuck that COVID shit!”

Our contributing photographer, Amy Harris, attended several other Sturgis events over the weekend and reported seeing a similar disregard for CDC guidelines. “I definitely stood out in the crowd with the camera and as one of the few people in town wearing a face mask,” she recounted. “No one that I spoke to during the entire weekend denied that the virus existed. They simply stated that they were willing to take the risk to get out of the house and see their friends for the annual trip.”