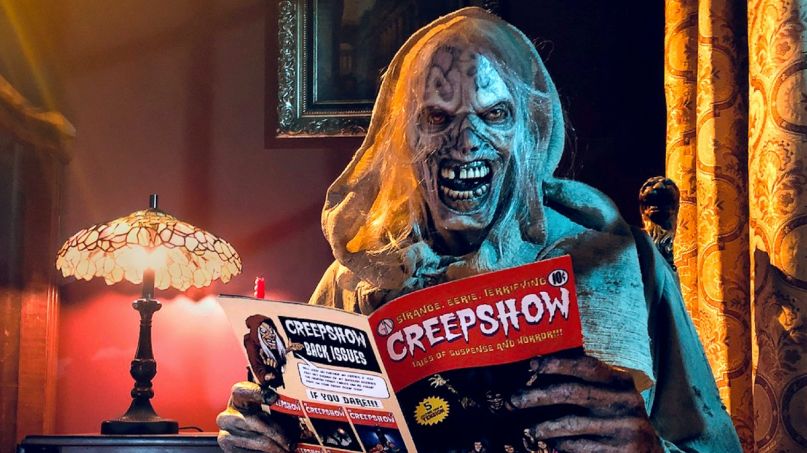 Pandemic be damned, The Creep isn’t sitting out this year’s spooky season. Today, Shudder and AMC have announced the ghoulish host will return to spin more terrifying tales on Monday, October 26th with The Creepshow Halloween Special.

The talent also extends beyond the text and ink! Kiefer Sutherland voices King’s grisly tale about a man who goes to great lengths to stave off hunger on a deserted island, while Joey King leads Hill’s parable about a family road trip gone horribly awry.

“Halloween wouldn’t be complete without Creepshow, so with the help of the father and son team of Stephen and Joe, as well as a fantastic animated format, we get to continue the tradition and spirit of Halloween,” said Nicotero in a press release.

“Although Season 2, now in production, has been delayed due to Covid, Greg and his team were still able to pull off this fantastic special so everyone will be able to enjoy a little bit of Creepshow during Halloween season,” echoed Shudder GM Craig Engler.

It’s certainly a nice Halloween treat for horror hounds. Having King and Hill involved is a smart touch to keep things in the family. In addition to their involvement with the 1982 original film, both of their works bookended the debut season of the series.

In fact, if you recall, “Survivor Type” was heavily rumored for the first season. Granted, we’d love to see what Nicotero and his team could do with the gore (and, woo wee, there is plenty of room for it), we’re just glad to see it come to fruition.

The Halloween Special is one of many thrills and chills that Shudder has planned for their ensuing 61 Days of Halloween. The lineup also includes the return of Joe Bob Briggs and over a dozen of original films, from Scare Me to The Mortuary Collection.

Stay tuned for reviews and coverage at Consequence, particularly from all our horror-related podcasts: The Losers’ Club: A Stephen King Podcast, Halloweenies, Psychoanalysis, and The Horror Virgin will all be busy bringing the boos.