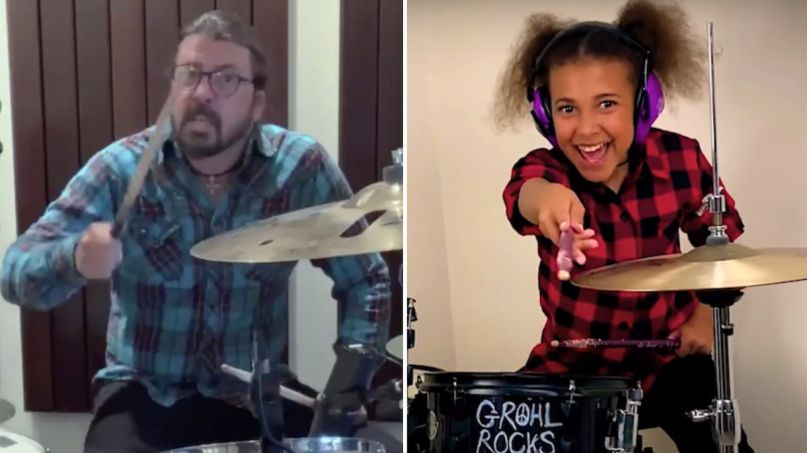 Bushell and Grohl first crossed paths when the former called for a drum battle with a video of her jamming to Foo Fighters’ “Everlong”. Grohl responded with a clip of him rocking Them Crooked Vultures’ “Dead End Friends”, which Bushell then matched beat for beat. The more seasoned rocker admitted defeat, but promised round two would be “something special.”

Now, Grohl has shared a video of a new theme song for Bushell that he wrote “off the top of my head.” With his daughters (The Grohlettes) providing backing vocals, Grohl delivers a signature tune fit for a true rock superhero. “She got the power/ She got the soul/ Gonna save the world with her rock and roll!” Grohl shouts on the hook. He plays guitar, drums, and bass on the track as well, splicing it all together in a fun lyric video you can watch ahead.

When the leader of one of the biggest bands in the world calls you “the queen of rock and roll” and you’re only 10 (guys, she’s 10), you’ve got to back that up with one hell of a response. So how will Bushell reply this time? We’ll have to wait and see, but for now, jam out to “Nandi” below.

It’s pretty safe to say Bushell is having one of the better 2020s of anyone on Earth. In addition to her back-and-forth with Grohl, she received a guitar from Tom Morello (his signature Soul Power Stratocaster) after ripping into “Guerrilla Radio” in support of Black Lives Matter. She said thanks by using the instrument to rock Audioslave’s “Cochise”. A month later, she received praise from Kirk Hammet for her full-band cover of Metallica’s “Enter Sandman”.

Update: Nandi Bushell has posted a reaction video of herself watching Grohl perform the theme song, showing her in complete awe of the gesture. She remarked, “I cant believe Mr. Grohl wrote a song about me!?! This is so so so #EPIC!! I think it’s the best song EVER, in the WORLD, EVER!!! Thank you so much Dave. You have raised the stakes to all instruments! I accept your next challenge! Thank you to the whole Grohl family!”

See both videos below.

Ok @Nandi_Bushell….Round 2! Every superhero needs a theme song. Here’s one for you! Mad props to The Grohlettes for the background vocals. pic.twitter.com/js9xBasbpw

I cant believe Mr. Grohl wrote a song about me!?! This is so so so #EPIC!! I think its the best song EVER, in the WORLD, EVER!!! Thank you so much Dave. You have raised the stakes to all instruments! I accept your next challenge! Thank you to the whole Grohl family! @foofighters pic.twitter.com/rWgTBwEtyb