Johnson describes himself as a "registered Independent... with centrist ideologies" 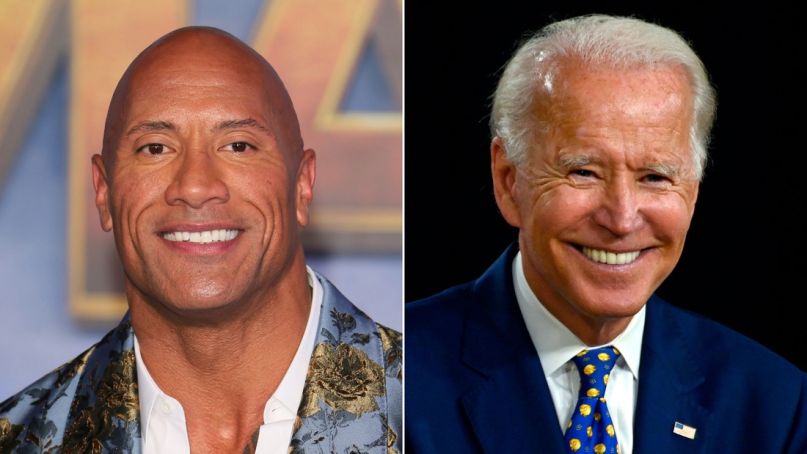 Dwayne Johnson has endorsed Joe Biden as the people’s champ for 2020.

“As a political independent and centrist for many years, I’ve voted for Democrats in the past and as well as Republicans. In this critical election, I believe Joe Biden and Kamala Harris are the best to lead our country, and as my first ever (public) Presidential endorsement, I proudly endorse them for the presidential office of our United States,” Johnson announced in a post to social media on Sunday.

“Progress takes courage, humanity, empathy, strength, grit, kindness and respect,” Johnson added, noting the attributes he thinks a president should embody. “Being KIND & RESPECTFUL to one another will always matter.”

Johnson also shared video of a discussion he had with Biden and Harris, during which he asked the candidates what they would do to earn the respect of the American people once in the White House. Both Biden and Harris spoke about the importance of acknowledging the truth — even when it’s inconvenient (like during a global pandemic). “When we fail, acknowledge it. We’re not going to be perfect, but take responsibility. Say this is what I’m going to do, this is what I believe and tell the truth,” Biden commented.

While some may scoff at Johnson as just another Hollywood liberal, that’s not necessarily the case. As former Sunlight Foundation CTO Tom Lee pointed out on Twitter, there are a number of reasons why Johnson’s endorsement carries more weight than others.

“This is a man who, in an age of of endless partisan fracture, has maintained such widespread palatability that he is not only America’s top grossing movie star but mentioned as a plausible political candidate (generally assumed to be a corporatist FL Republican…” Lee noted.

“If you are a student of The Rock’s instagram you will learn he studiously avoids taking positions on ANYTHING except: hard work (pro); fans (pro); troops (pro); his heritage (pro but in a nonthreatening way! it’s all good bro); his tequila company (pro); egativity (anti!) Picking a winner in this context means he’s seeing such a profound loser that there are no real costs involved,” Lee added.

The Rock, for whom I feel an abiding devotion, has endorsed Biden/Harris. I worry that casual observers will not realize just how profoundly damning this superficially vague and bloodless endorsement is. https://t.co/VzThg73SLv

If you are a student of The Rock’s instagram you will learn he studiously avoids taking positions on ANYTHING except:
– hard work (pro)
– fans (pro)
– troops (pro)
– his heritage (pro but in a nonthreatening way! it’s all good bro)
– his tequila company (pro)
– negativity (anti!)