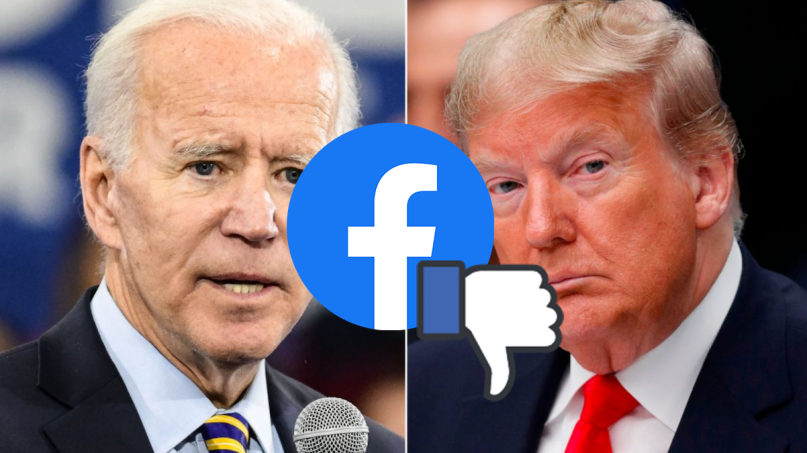 Despite what Donald Trump or Mark Zuckerberg say, it’s pretty clear at this point that foreign interference on Facebook helped sway the 2016 presidential election. While Zuck has been slow to take responsibility or hold users on the platform accountable, Facebook has started initiating some changes to prevent further manipulation in 2020. Today, the company’s founder/CEO announced new steps Facebook and Instagram are taking to combat election tampering — including banning new political ads beginning one week before November 3rd.

In his post announcing the changes, Zuckerberg explained barring ads beginning October 27th ensures Facebook has enough time to investigate any claims of misinformation. Trump has already been routinely criticized for pushing ads with false claims about his opponent, Joe Biden, with some being pulled for hate speech or outright lies. Any ads up before the October 27th cutoff will be allowed to continue to run and be re-targeted to new users, while new ads can begin running again on November 4th.

The decision to enact what are Facebook’s most sweeping political policies ever comes as the country braces for what is sure to be a contentious vote. Trump has already been cagey about accepting the results, and as recently as last night encouraged North Carolina voters to illegally cast two ballots to “stress test” the system. As such, Zuckerberg has committed to upping Facebook’s abilities to squash interference.

Under the new rules, Facebook will have greater ability to remove or attach notices to posts with misinformation about how to vote, whether explicit or implicit. That includes posts using the COVID-19 pandemic to dissuade going to the polls. There will also be links “to authoritative information about COVID-19” on any posts with inaccurate or misleading information on how the coronavirus might impact voting.

Facebook is also preparing for “a period of intense claims and counter-claims as the final [election] results are counted.” They’ll use their Voting Information Center, previously revealed in June and soon to be pinned at the top of everyone’s news feed, “to prepare people for the possibility that it may take a while to get official results.” In collaboration with the news agency Reuters as well as the National Election Pool, the VIC will provide “authoritative information about election results.” Any posts seeking to delegitimize the election or preemptively call the results will be slapped with an informational label pointing to official results.

Zuckerberg also said his website is already cracking down on “militias, conspiracy networks like QAnon, and other groups” trying to stir violence or civil unrest. He claimed Facebook has already removed “thousands of these groups,” and earlier this week took down a network of pages from foreign agents attempting to interfere with the US election. The ring included 13 accounts and two pages “that were trying to mislead Americans and amplify division.”

What’s more, Facebook Messenger will cap the number of people users can forward messages to in order to limit the spread of misinformation. The number of forwards will drop from over 150 to just five.

That all sounds like a lot of changes and, ostensibly, for the good. However, it also tips Zuckerberg’s hand a bit; after previously being resistant to pulling down posts or political ads with blatant falsehoods in the name of free speech, the new rules show Facebook indeed has the power to curb misinformation should it so choose. Still, it seems the policies aren’t making either side of the political divide particularly happy.

Tara McGowan, the chief executive of the liberal nonprofit group Acronym, told The New York Times blocking ads ahead of the election will just leave space for right-wing “news” agencies like Breitbart to get more air. “By banning new political ads in the final critical days of the 2020 election, Facebook has decided to tip the scales of the election to those with the greatest followings on Facebook — and that includes President Trump and the right-wing media that serves him,” she said.

Of course, if Facebook truly is as vigilant as Zuckerberg claims, one might expect such posts to at least be labeled as misleading. (Facebook has already tagged Trump’s post from earlier today about voting twice with a link to its Voter Information Center.)

Meanwhile, Trump campaign spokeswoman Samantha Zager slammed Facebook for being “the Silicon Valley mafia.” “When millions of voters will be making their decisions, the president will be silenced by the Silicon Valley mafia, who will at the same time allow corporate media to run their biased ads to swing voters in key states,” she said in a statement.

In the end, whatever steps Facebook takes to try and keep this already insane election fair and legitimate, Zuckerberg makes a decent final point: “I believe our democracy is strong enough to withstand this challenge and deliver a free and fair election — even if it takes time for every vote to be counted… But it’s going to take a concerted effort by all of us — political parties and candidates, election authorities, the media and social networks, and ultimately voters as well — to live up to our responsibilities.”

Stay informed about voting rights and regulations, get information about early voting, and more at Vote411. Find Zuckerberg’s full announcement of Facebook’s policies below.