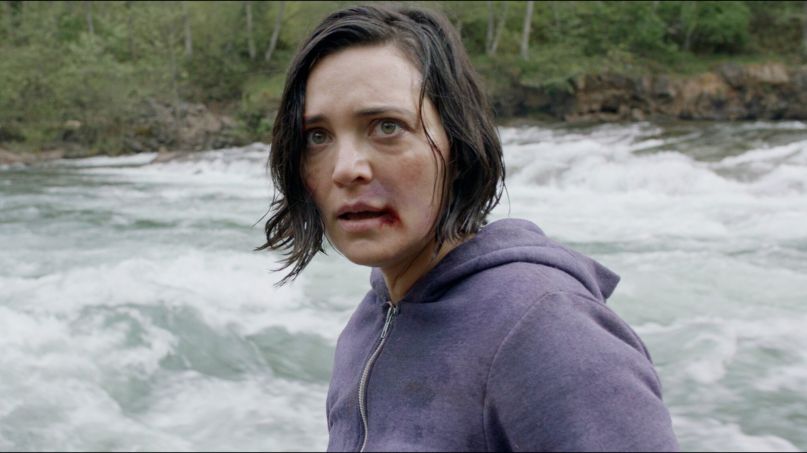 The Pitch: Recently widowed Jessica (Jules Willcox) attempts to leave her past by absconding into the Pacific Northwest wilderness. Unfortunately for her, those plans are literally derailed after a harrowing run-in with a cold-blooded killer. Following a series of very unfortunate events, Jessica finds herself kidnapped, beaten, and locked away in a remote cabin. But there’s hope! She manages to escape her captor, only to find herself in the middle of nowhere … completely alone … except for her pursuer.

Bare Bones: Screenwriter Mattias Olsson adapts his 2011 Swedish thriller Gone for American audiences with Alone. He keeps things lean and mean, though, eschewing any of the fat that traditionally comes with Hollywood remakes. Instead, subtlety is survival with this reimagining, and that’s pretty much how director John Hyams likes it. After all, his series Z Nation and Black Summer — especially Black Summer — have thrived from a less-is-more approach to narrative, and Alone similarly follows suit.

It’s simple stuff. So simple that true crime enthusiasts will likely be able to tell you what’s coming next without missing a beat. But that meat and potatoes approach allows Hyams to capitalize on those expectations — bruising them, pummeling them, stabbing them. If you’re anticipating the worst, well, you’re probably going to get it. That’s the icy terror wired around every second of Alone, and why you’ll likely spend most of the film’s svelte 97 minutes either gasping or swinging at the air. It’s frustrating.

Frustrating because so much of what goes down confirms our worst fears about society. When Jessica has a run-in with Marc Menchaca’s aptly dubbed Man, you know he’s going to pursue her. Just like you know he’s going to gaslight her, prey upon her forced kindness, draw her into his game, and basically check off every box in the serial killer handbook. None of this revelatory, or the least bit shocking, and that’s the point: The inevitability of the situation is what makes it so paralyzing.

Granted, that leaves little hope on the table, but that sense of hopelessness is a sweet spot for Hyams and Olsson. It’s where Alone becomes an earned underdog story, and they build on that survivalism through wit and character. Jessica isn’t a soldier. She isn’t an action figure. She isn’t a caricature of heroism. She’s human, a human who made pretty much all the right choices, and yet still wound up being subdued and victimized. That kind of futility is hideously relatable in an all too unnerving ways.

When a Man Hunts a Woman: None of this would work if you didn’t have two compelling leads, and that’s the main fuel line of Alone. Menchaca and Willcox are brilliant in this, diametrically opposing forces that are as engrossing as they are haunting.

Menchaca brings some of that tyrannic machismo we saw earlier this year in HBO’s The Outsider, only he’s less Terminator and more BTK. He’s a walking DSM-5 of serial killer quirks that should shiver your bones and leave you gritting your teeth — particularly when he’s gaslighting Jessica. In these painful moments, he plays up the Nice Guy bit, chipping away at her icy exterior with mock astonishment and false pleasantries. He’s so damn good at it you’ll want to bludgeon him with a rock yourself.

But the real ticket here is Willcox, whose dragged-through-the-ringer performance is a career-changing moment for the Bloodline star. She instills so much off-script integrity in Jessica, starting with her exasperated expressions and later sealing the deal with her posterizing hero moves. (The way she wields a tire iron towards the end is a true popcorn moment.) Even beyond the carnal savagery, Willcox thrives as a grieving widow, and it’s through her faintest actions we get the full story.

Hunters By the Million Sing for Dr. Chilton: Yes, that’s Silence of the Lambs star Anthony Heald in the camouflage. The veteran talent has a choice supporting role in this chaos, and it’s admittedly refreshing to see him pop up. Unfortunately, he’s still surrounded by sociopaths, but he still has a full head of luscious hair. So, that’s a win.

Good Grief: Some might argue Olsson’s slim approach to narrative does a disservice to the story’s themes of grief and perseverance, but there’s a curious energy behind it all. It’s an athletic pacing that suggests less of a meditation and more of a workshop on its themes. And given that Olsson breaks the entire thing down into pulpy chapters, it’s almost as if we’re watching Jessica process these moments as they’re happening. Hyams exacerbates that notion during the film’s rare, tranquil gasps, when he’s not focused on the action, but a recalibration of Jessica’s dazed point of view. It’s a slim move that allows the film to retain its breakneck speed without getting too caught up in the context of it all.

The Verdict: Look, Alone is exactly what it sells — a taut, hot-wired survival thriller. With its gaunt storytelling, meaty characters, and high-stakes action, the film delivers on all fronts. It’s a brutal rollercoaster that zigs and zags, but never once loses sight of where it’s going. And that narrative authority affords a visceral watch that should get your heart pumping and your anxiety running. It’s stylish, it’s slick, and it fires on all cylinders without ever getting too maudlin, too cute, or too smarmy. You get a hero in Willcox, a villain in Menchaca, and a story to chew on. Christ, what more do you need?