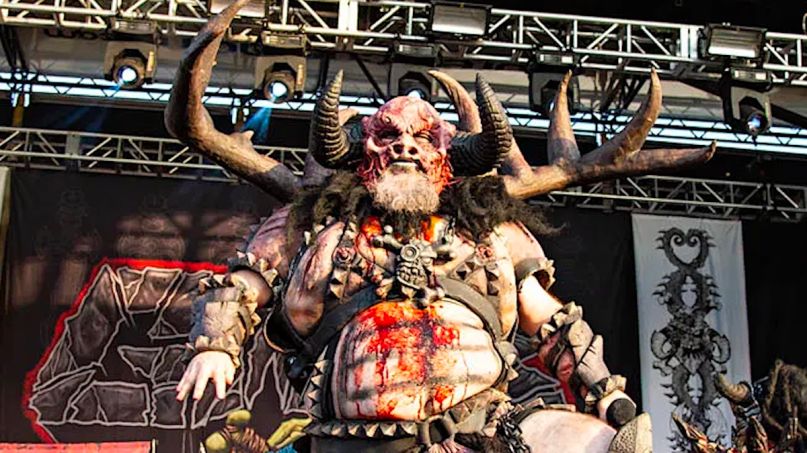 GWAR have announced a drive-in show on October 10th at the Diamond Drive-In in Richmond, Virginia. The live concert will precede the upcoming 30th anniversary reissue of the band’s debut album, Scumdogs of the Universe.

The band beamed in this transmission from their Antarctic compound, announcing the one-off performance: “There are exactly ZERO cases of COVID-19 in the freezing cold arctic tundra of Antarctica. This is great news as your Lords and Masters GWAR have been cleared for travel. Unfortunately, during this time of quarantine, GWAR have also found themselves running precariously low on magic talent-dust (drugs), toilet paper, and money. But don’t worry your hideous little heads, as your Scumdog overlords have a plan to replenish their stash and entertain the faithful legions of Bohabs at the same time!”

Added singer-bassist Blothar the Berserker: “Denizens of Richmond, Virginia! Americans do everything in their cars, and now that will include watching the greatest rock and roll horror show on this or any other planet! Truly, what is October without a global pandemic and the chance to watch GWAR from the comfort of your shitty old hoopty?! Grab a hotdog, slather it in chili, and shove it down your throat as we bring you the pinnacle of entertainment, the ultimate creature feature, live and writhing…all over your windshield!”

As expected from any GWAR show, it’s sure to be a bloody spectacle, so be sure to bring some extra windshield wiper fluid for the inevitable red rain.

GWAR have stayed busy during the pandemic promoting the Scumdogs reissue and hosting their own livestream variety show. Regarding a recent campaign to replace a statue of Robert E. Lee with one of late GWAR leader Oderus Urungus, Blothar recently told Heavy Consequence over Zoom that Oderus wouldn’t have wanted his statue among a “row of losers.”

Moreover, drummer Jizmak Da Gusha told fans to drink bleach and praised Donald Trump for suggesting that people inject disinfectants to cure themselves of COVID-19. He also declared, “Once this [pandemic] is all over, we want to kill you up close.”

Purchase tickets to the drive-in show via etix starting September 11th at noon ET. Check out the vintage mondo-style poster for the event and our full interview with Blothar below.