She first revealed the guitar during her recent Emmy performance 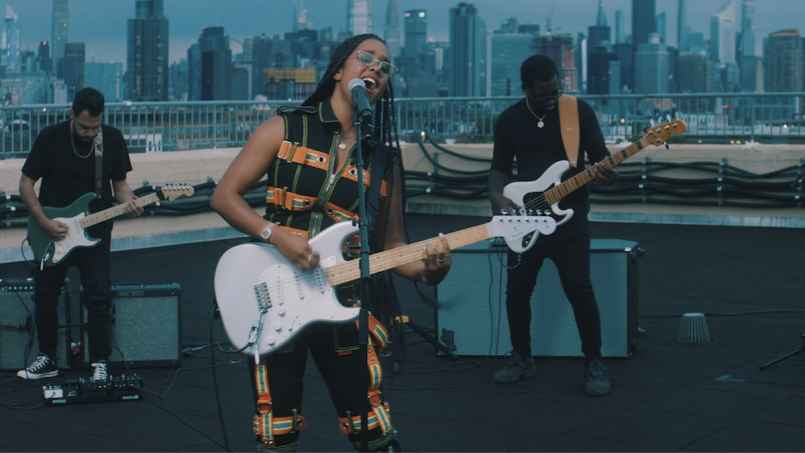 Two-time Grammy-winner H.E.R. is the first Black female artist to launch a Fender Signature Guitar in the company’s 74-year history.

H.E.R. first revealed the new axe in her performance Sunday at the 2020 Primetime Emmy Awards. During the “In Memorium” segment, she covered Prince’s “Nothing Compares 2 U”, ripping through a flawless guitar solo in the process. Now, that same model can be yours for $1,099.

The H.E.R. signature Stratocaster comes with an alder body that’s finished with a new iridescent color, which Fender is calling Chrome Glow. It features a modern oval “C”-neck shape, which should be comfortable for most hand sizes, as well as Fender’s Vintage Noiseless pickups that promise a clean, well-defined tone. The custom neck plate is engraved with H.E.R.’s artwork.

In a statement, H.E.R. explained how her love of music is tied up with Fender and her father. She said,

“My father taught me how to play my first blues scale on a mini black-and-white Strat®, so it’s absolutely surreal I have partnered with Fender to design my own Signature Stratocaster®. As an artist, I find that my most personal thoughts make the most relatable music. By designing a Stratocaster® with a color, shape and sound that is one-hundred-percent my own, my hope is that other young women and players from all backgrounds feel inspired to pick up this guitar, tap into their thoughts, and create amazing music.”

H.E.R. took her new toy for a test spin in a combination interview/concert for her Fender Signature Session. She said, “Since I was young, I really loved the guitar.  I love everything about the guitar. This is my way of expression, and it’s part of who I am.” She played a tight four-song set spanning “Fate”, “Sometimes” (which she premiered at the Grammys earlier this year), “Glory”, and “Make It Rain”. Check out that video and revisit her performance at Sunday’s Emmy below. The guitar itself can be purchased through Fender’s website, or via Reverb.

Earlier this year, H.E.R. joined A Boogie Wit da Hoodie on Fallon for “Me and My Guitar”, and she also contributed to Jhené Aiko’s new album Chilombo. H.E.R. also made a couple of appearances on Michelle Obama’s playlist inspired by her Spotify podcast.