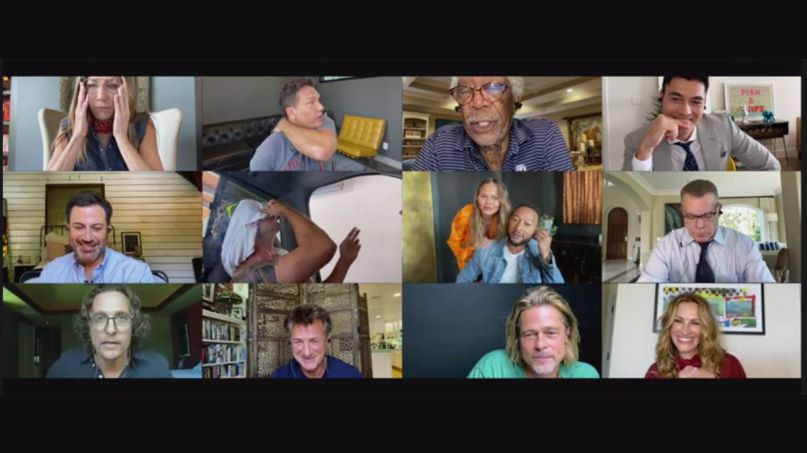 Am I hallucinating here or did we just witness the best livestream event of the pandemic? On Thursday night, an all-star group of celebrities got together for a charity table read of Fast Times at Ridgemont High put on by — of all people — Dane Cook. Unrehearsed and ridiculously joyous, the event featured appearances from Brad Pitt, Jennifer Aniston, Julia Roberts, Morgan Freeman, Shia LaBeouf, Matthew McConaughey, Sean Penn, Henry Golding, John Legend, Ray Liota, and Jimmy Kimmel.

Though Aniston, wearing a red bikini top over her shirt, kept her cool, good ol’ Pitt in his foam pirate hat couldn’t help but blush the whole time. And then there was Freeman, the world’s greatest narrator, talking about how “the incredible Linda Barrett’s breast fall loose.” “Lord, have mercy,” he added off book. McConaughey rocking back and forth and Roberts’ giant smile as it all went down were essentially all of us.

LaBeouf, as he’s wont to do, brought his own energy to the whole thing. While everyone else sat comfortably in their homes, he chose to stream from the cab of his truck parked in what appeared to be a swelteringly hot garage. Shirtless, constantly wiping sweat from his face, and smoking incessantly, he went full on method acting for his reading of the iconic Jeff Spicoli — all while Penn, who played the character in the film, looked on. Perfectly strange and perfectly LaBeouf, even his fellow actors couldn’t keep themselves together as he hot-boxed his car and actually exited scenes by leaving the frame.

The whole table read is worth a watch for moments like these. There’s a Chrissy Teigen cameo, McConaughey turning Mike Damone into Wooderson, and appearances from director Amy Heckerling and writer Cameron Crowe. Plus, the event raised $50,000 for Penn’s nonprofit CORE and the REFORM Alliance, the latter of which focuses on protecting America’s incarcerated population from COVID-19, so it was all for a great cause. Check out the full stream below, along with some select highlights.

JENNIFER ANISTON TEACHING JULIA ROBERTS HOW TO GIVE A BLOW JOB is most iconic thing — IM DYING pic.twitter.com/IzfxepBbcu

When I tell you Shia LaBeouf was DEDICATED to this role. #FastTimesLive

Love for Shia Labeouf increasing by the second #FastTimesLive pic.twitter.com/WaB6J1D0Qy