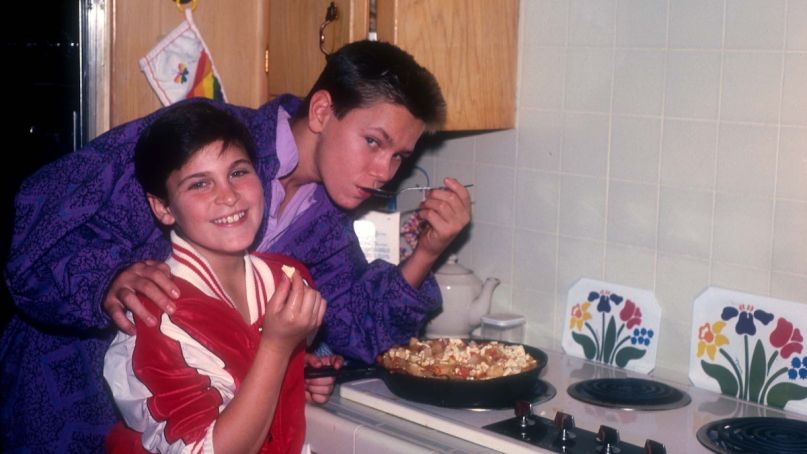 Joaquin Phoenix with River Phoenix in 1985

Congratulations are in order to Joaquin Phoenix and Rooney Mara, who recently welcomed their first child. The baby boy is reportedly named River in honor of Phoenix’s late bother.

Victor Kossakovsky, who worked alongside Phoenix on a new documentary called Gunda, let the news slip during a recent screening of the film. Asking about Phoenix’s involvement (via The Guardian), Kossakovsky said: “He just got a baby by the way … A beautiful son called River.”

Phoenix and Mara first met on the set of Spike Jonze’s 2013 film Her. After several years of dating, the couple got engaged in July 2019. A short time later, word surfaced that Mara was pregnant.

Joaquin’s other brother, River, died at the age of 23 in October 1993 from a drug overdose. An accomplished actor in his own right, River is best known for his roles in films like Stand By Me, Running on Empty, and My Private Idaho. He also played music in the band Alexa’s Attic alongside his sister Rain.

Upon accepting the Oscar for Best Actor for Joker at the Academy Awards earlier this year, Joaquin paid tribute to his brother by quoting a song lyric River had written: “When he was 17, my brother wrote this lyric: ‘Run to the rescue with love and peace will follow.'”

During another speech at last year’s Toronto International Film Festival Tribute Gala, Joaquin credited his brother for renewing his interest in acting: “When I was 15 or 16 my brother River came home from work and he had a VHS copy of a movie called Raging Bull and he sat me down and made me watch it. And the next day he woke me up, and he made me watch it again. And he said, ‘You’re going to start acting again, this is what you’re going to do.’ He didn’t ask me, he told me. And I am indebted to him for that because acting has given me such an incredible life.”