"I find it confusing, I would say, that that the president has chosen to use my song for his political rallies, when in fact it seems like he is probably the fortunate son” 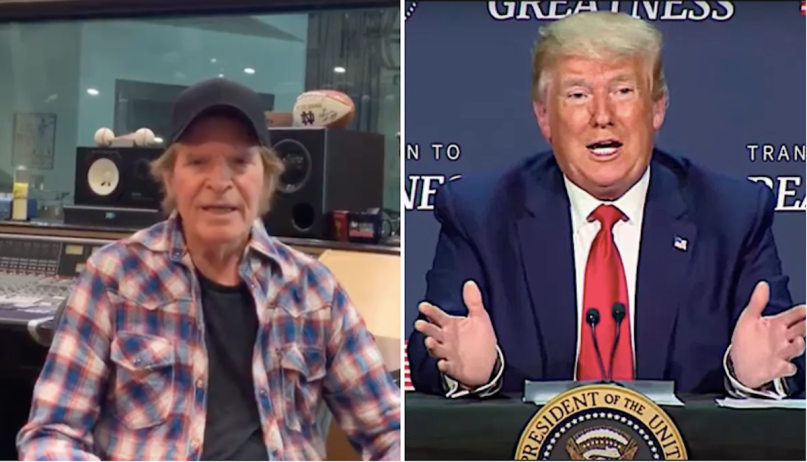 The moment was recorded in a tweet by Washington Post reporter Dave Weigel, who called it “an entry for the ‘nobody listened to the lyrics’ hall of fame.” The tweet quickly went viral, and today Fogerty issued his response. In a Facebook video called “Meaning behind Fortunate Son,” the legendary rocker broke things down so even a very stable genius could understand.

“Recently, the President has been using my song ‘Fortunate Son’ for his campaign rallies,” the former CCR frontman began, “which I find confounding, to say the least.” He went on to explain the intended — and frankly obvious — message about how war only comes for poor people. Meanwhile “people of privilege — or in other words, rich people,” were able to escape the Vietnam draft by, for example, lying about a non-existing medical condition. In other words, the song was written about people like Donald Trump. Fogerty explained,

“The very first lines of ‘Fortunate Son’ are, ‘Some folks are born made to wave the flag, ooh their red, white and blue. But when the band plays ‘Hail to the Chief,’ they point the cannon at you.’ Well that’s exactly what happened recently in Lafayette Park. When the President decided to take a walk across the park, he cleared out the area using Federal troops so that he could stand in front of St. John’s church with a Bible. It’s a song I could’ve written now. So I find it confusing, I would say, that that the president has chosen to use my song for his political rallies, when in fact it seems like he is probably the fortunate son.”

It goes without saying that Trump didn’t request permission to use “Fortunate Son”. Dozens of artists have complained about Trump’s unwillingness to follow licensing laws, including The Animals’ Eric Burdon, the Leonard Cohen estate. The Rolling Stones,  and The Village People. Neil Young took things a step further and brought a lawsuit against Trump.

“Fortunate Son” plays as Trump de-planes, an entry for the “nobody listened to the lyrics” hall of fame. pic.twitter.com/fJBPI7CxGQ