"I didn't know that I wanted my name on your sh*t factory, but now that you've floated it as an option, it is all that I want" 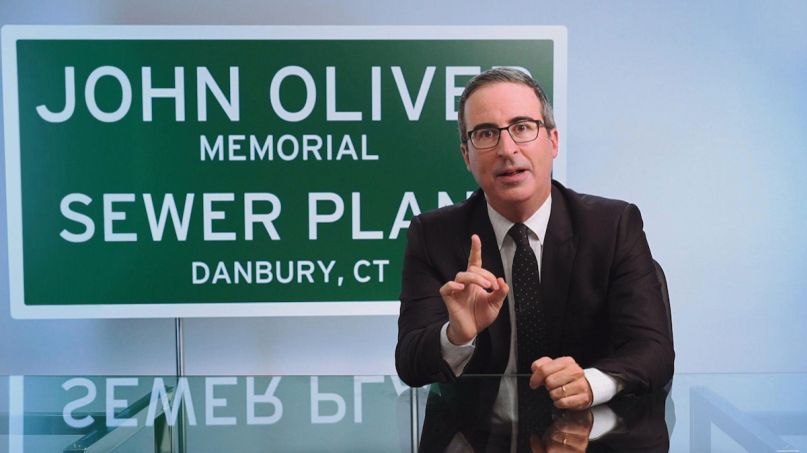 John Oliver is a true double threat. Not only does his show frequently illuminate both prominent and less visible political issues, but he brings a level of absurdist fun to this absurd reality. Take, for example, his pointless feud with Danbury, Connecticut. What started as another of the Last Week Tonight host’s random verbal thrashings has blossomed into a true chef’s kiss of American comedy.

To recap, Oliver called out Danbury during a segment on jury selection on HBO’s Last Week Tonight. Why Danbury? For the same reason he calls Adam Driver an “irredeemable steer” — why the hell not? In retaliation, Danbury’s Mayor Mark Boughton released a rebuttal video, saying the city was renaming its new multi-million dollar waste facility as the John Oliver Memorial Sewer Plant. “Why? Because it’s full of crap just like you, John!” said Boughton.

Unfortunately, Boughton has since pulled back on the vow, saying the “video was in jest. We’re not really going to name the sewer plant after John Oliver.”

This set the HBO host off. “F*ck you, Danbury. You had the first good idea in your city’s history, and you chickened out on the follow-through. What a classic Danbury move,” Oliver said in the closing segment of Sunday’s Last Week Tonight. “Look, I didn’t know that I wanted my name on your sh*t factory, but now that you’ve floated it as an option, it is all that I want.”

Now doubly determined to see his name hanging above Danbury’s crap, Oliver — in typical fashion — went all in. He pledged $55,000 in donations to Danbury charities, including $25K to Connecticut Food Bank, another $25K to fulfill all requests by Danbury school teachers on Donors Choose, and $5K to ALS Association Connecticut. All Danbury has to do is officially name the sewage plant after him. He even already made the actual John Oliver Memorial Sewer Plant sign so Boughton wouldn’t have to waste tax payers’ money.

Oliver gave Boughton one week to respond, and urged him not to “Danbury this one up.” “If I don’t hear from you in one week’s time, this whole offer — charity donation, the sign, everything — opens up to your rival towns. Yeah, I’m talking about Waterbury, I’m talking about Milford, I’m even talking about Torrington,” threatened Oliver. “Yeah, Danbury: Torrington.”

Amazingly, Boughton and Danbury city officials are reportedly considering the deal. “I think it’s very generous and we appreciate that,” said Boughton, noting that there would need to be a City Council vote to approve the renaming. He also promised a response video on Thursday (via USA Today).

As Oliver said to close out the show, we “await your response with interest.”