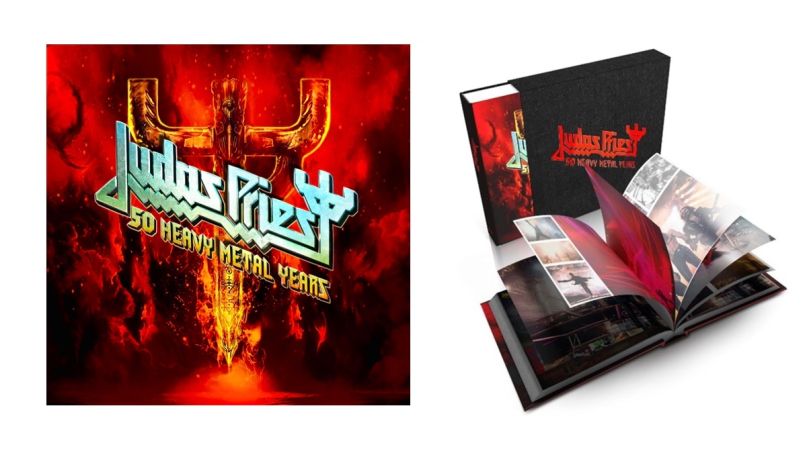 The book is a true testament to Judas Priests’ half-century run as one of the most influential and visually captivating metal bands of all-time. The photography was curated by David Silver, Ross Halfin, and Jayne Andrews and features “unseen, unpublished photographs” by Ross Halfin, Neil Zlozower, Mark Weiss, Fin Costello, Oliver Halfin, and more. The photographs will be linked by an accompanying history of the band written by Mark Blake, allowing the book to work as a photo documentary of sorts.

“I’ve photographed Judas Priest from 1978 until now and of all the bands I’ve worked with they are one of the most enjoyable to me — you have to love the mighty Priest,” Ross Halfin said in a press release.

In addition to Blake’s text, all current members of Judas Priest contributed written pieces “detailing their love and passion for the band.” The book is being published by Rufus Publications, who’ve previously created coffee table hardbacks for Led Zeppelin, AC/DC, and Whitesnake, among others.

“We spear-headed the visual image of metal — breathing new life into it and it has been captured forever in the pages of this book,” guitarist Glenn Tipton remarked in the press release.

Indeed, Judas Priest could be seen as the link between proto-metal and the more modern concept of the genre. Building from the hard rock of the early ’70s, Priest turned up the intensity of both their leather-clad stage performances and music, defining what became known as the “New Wave of British Heavy Metal.” Tracks like “Breaking the Law” and “Living After Midnight” are perennial radio staples, while albums like the technical masterpieces Painkiller and Firepower cemented Priest’s place as virtuosic composers and musicians. They continue to do it all.

Meanwhile, singer Rob Halford has begun work on a solo blues album, showcasing his many talents. We’ve heard Halford belt out Christmas songs will the same passion of his work with Priest, so when Halford says the blues songs sound “great” so far, we’re apt to believe him. The same team that worked on his holiday album, Celestial, is assisting with the new material.

Check out the four editions of the photo book via Rufus Publications, where fans can place pre-orders starting this Friday at 10 a.m. ET.

Judas Priest Celebrate their career with their first official book titled – 50 HEAVY METAL YEARS PRE-ORDER DETAILS Judas Priest – 50 HEAVY METAL YEARS can be exclusively pre-ordered at www.rufuspublications.com The pre-order starts on September 11th 2020 at 3pm UK time on a first come first served basis Special priced bundle editions will also be available to pre-order and a 10% pre-order discount can be used at the online checkout with the code PRIEST50 JUDAS PRIEST and Rufus Publications are pleased to announce the publication of the first ever official Judas Priest book documenting the bands extensive history over the last 50 years – titled JUDAS PRIEST – 50 HEAVY METAL YEARS the book has been put together by David Silver, Ross Halfin and Jayne Andrews. “I've photographed Judas Priest from 1978 until now and of all the bands I’ve worked with they are one of the most enjoyable to me – you have to love the mighty Priest,” Ross Halfin, August 2020 This huge, 648 page coffee table book chronicles the history of the world’s foremost heavy metal band using hundreds of unseen, unpublished photographs from Rock’s greatest photographers including Ross Halfin, Neil Zlozower, Mark Weiss, Fin Costello, Oliver Halfin and many more. With a linking text by renowned journalist Mark Blake the book explores the bands exciting history on stage and off in a unique photo documentary designed to excite fans and devotees of true heavy metal the world over. Current band members have all contributed to the book with written pieces detailing their love and passion for the band, making this an extraordinary artefact for their legions of followers. The book features an exclusive cover by Mark Wilkinson who has worked with the band for many years now. Glenn Tipton comments “We spear-headed the visual image of metal – breathing new life into it and it has been captured forever in the pages of this book”. See all the details at http://bit.ly/JP50Book