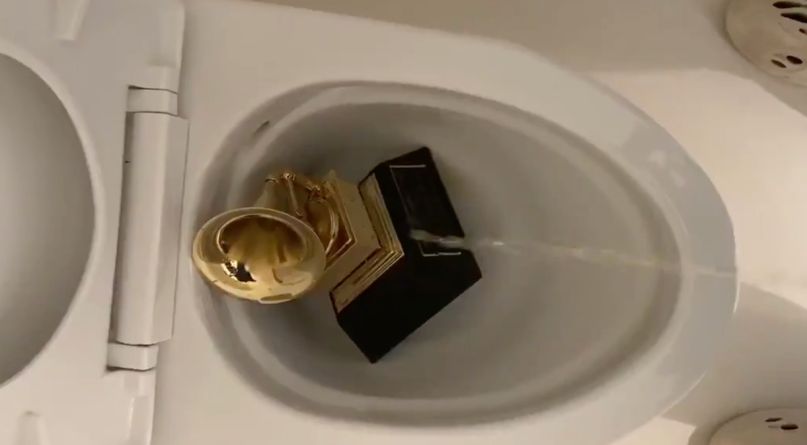 With just 47 days out from the presidential election, Kanye West is focused on pressing matters relevant to the future of our country: his record contract. In case you aren’t following him (and god bless you if you aren’t), Kanye is amidst a multi-day tweet storm in an effort to free himself from existing contracts with Universal (his record label) and Sony/ATV (his publisher).

“EVERYONE AT UNIVERSAL AND VIVENDI PLEASE UNDERSTAND THAT I WILL DO EVERYTHING IN MY LEGAL POWER AND USE MY VOICE UNTIL ALL ARTIST CONTRACTS ARE CHANGED STARTING WITH GETTING MY MASTERS FOR MY CHILDREN I WILL NOT STOP I PROMISE YOU IM AM PETTY AND VERY PERSONAL,” Kanye proclaimed. He then proceeded to tweet copies of his contract with Universal, page by page (apparently the guy has never heard of Dropbox?).

In a later tweet, Kanye warned, “TRUST ME I WONT STOP UNTIL ALL IS FAIR.” To articulate that point, he posted a video of himself urinating on a Grammy trophy. “Trust me … I WONT STOP,” read the accompanying caption.

Trust me … I WONT STOP pic.twitter.com/RmVkqrSa4F

Kanye has been at odds with Universal and Sony/ATV for several years now. In early 2019, he filed lawsuits against both companies over unpaid royalties and ownership rights. He claimed his existing contracts with Universal and Sony amounted to servitude and said he was entitled “to be set free from [their] bonds.” His lawyers pointed to a California law that limits personal service contracts to no more than seven years.

Earlier this week, he announced that he would amidst a multi-day tweet storm until he was released from the contracts. Kanye’s most recent solo album, Jesus Is King, came out in October 2019. He previously announced a new album called Donda slated for July 24th. However, nearly two months later, the record has yet to materialize.

And yet, as much as he dislikes his record label and publisher, his disdain for the Grammys is even greater. Despite being one of the most decorated musicians of all time, he’s boycotted the awards ceremony for the last several years, citing the snubbing of albums including My Beautiful Dark Twisted Fantasy and Yeezus. Hence, his decision to relieve himself on a Grammy trophy.

On a related note, yours truly receives push notifications from both Kanye’s and Trump’s Twitter accounts. I ask that you keep me in your thoughts today.