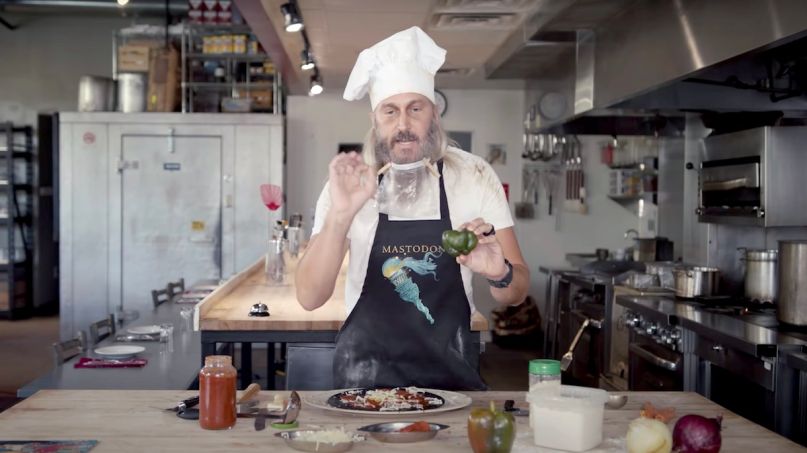 As bands continue to navigate through the pandemic, Mastodon have launched their own cooking show. And what better way to combine musical and culinary talents than by preparing a vinyl-crust pizza?

That’s right, in the first episode of “Cooking with Mastodon”, singer-bassist Troy Sanders (aka Chef Troyardee) teaches us how to prepare a pizza using a vinyl album as the crust.

While the end result may not seem tasty — or even edible — Sanders gives us plenty to enjoy in the humorous episode, which clocks in at just over two minutes.

Wearing makeup that makes him look like he just made his way out of a crypt, Sanders uses “fresh mozzarella from a goat that [he] milked this morning.” He also tells us to “look for the green pepper that is starting to turn black, [which] indicates almost rotten but flavor at its peak.”

It appears that new episodes of “Cooking with Mastodon” will premiere regularly, as the band’s Facebook page tells us, “Stay tuned for next week’s installment!”

Mastodon’s culinary venture comes on the heels of the release of their new compilation album, Medium Rarities, which contains the new track “Fallen Torches” and hard-to-find cuts from throughout their career.