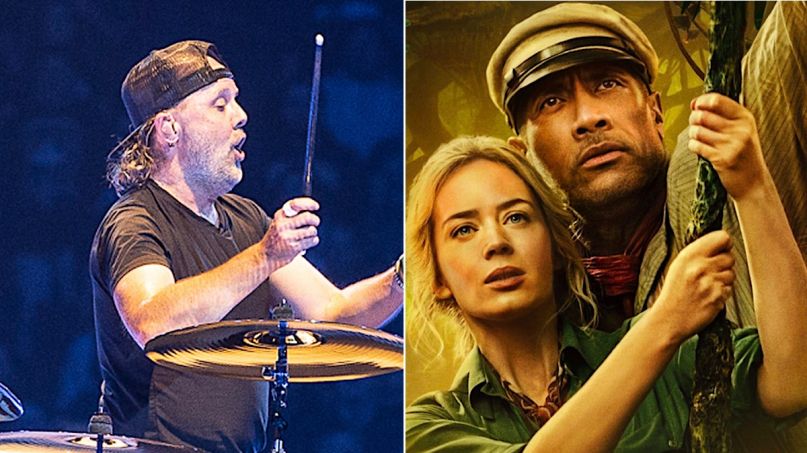 Metallica’s classic ballad “Nothing Else Matters” is being transformed into an orchestral piece for a key scene in the upcoming Disney film Jungle Cruise. The blockbuster adventure stars Dwayne Johnson and Emily Blunt, and is set for a July 30th, 2021 release after being delayed due to the pandemic.

Lars Ulrich told Collider that the idea for the collaboration originated with Disney production president Sean Bailey, whom the drummer described as a “lifelong rock fan” who’s “always been a Metallica fan.” Bailey eventually connected the band and Oscar-nominated composer James Newton Howard.

The song is apparently being rearranged for the movie score format, with a sweeping orchestral treatment worthy of Howard’s canon. “Nothing Else Matters” plays during a significant part of the movie, but Ulrich didn’t give away any spoilers.

“James Newton Howard, the man, the myth, the absolute legend!” Ulrich said. “Considering what’s he’s done, it’s an absolute honor to have done this with him, and we’re excited for the world to hear it. It’s kind of an interesting morph, because it’s kind of — and I don’t want to give too much of it away — but it’s a very unusual morph in that it’s kind of his arrangement of ‘Nothing Else Matters’ that we’re playing. We wrote the song, but he took the song and rearranged it to fit something specific in the film — and obviously, I’m not going to give any of that away — but we then kind of took on his version of it. I think that’s all that should be said.”

Metallica are no strangers to orchestral arrangements. The band just released S&M2, showcasing their concerts with the San Francisco Symphony last year, where they pulled off a pristine version of “Nothing Else Matters”.

Meanwhile, Metallica could write and record new music this fall, according to Ulrich. In an interview with NME, the drummer said they’re sending ideas “back and forth,” but that the biggest obstacle was isolation and not being able to play together.

“The hardest thing about being in four different spaces is that there’s no software that can have us all play in real time to reach other,” he said. “So I can play something and send it to the next guy and then he can play on it and he can send it to the next guy, or vice versa, but we can’t play at the same time so it takes the impulsivity and the momentary energy out of the occasion … we’re looking forward to seeing if at some point this fall, we can get back into another bubble where we write and play and maybe even record — so we’re looking forward to the possibilities on that one.”

That said, the band did get together recently to rehearse for their first 2020 concert, which recently screened at drive-in audiences across North America.

Check out the trailer for Jungle Cruise below and watch footage of Metallica performing “Nothing Else Matters” from S&M2.