Nine Inch Nails’ Pandemic Merch Is Both Clever and Grim 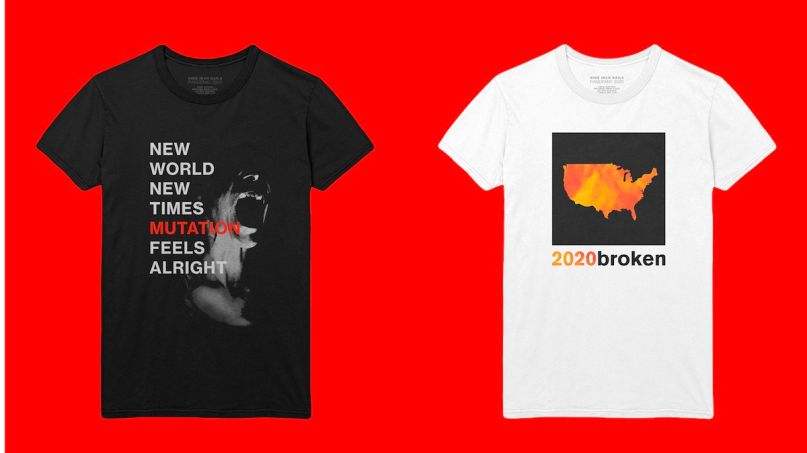 Tackling bleak subject matters is nothing new for Nine Inch Nails, but even Trent Reznor hasn’t seen the likes of the COVID-19 pandemic before. Now, some of NIN’s past works have inspired a new line of “Pandemic 2020” merch.

For a limited time, Nine Inch Nails are selling five new T-shirts for “modern times” via their official online store. The tees display song titles and lyrics from throughout the band’s career to address the strange world in which we’re currently living.

One such design uses the lyrics “New world/ New times/ Mutation feels alright” from the song “Shit Mirror” off the 2018 album Bad Witch. Another repeats the song title “Everyday Is Exactly the Same” from 2005’s With Teeth.

Two of the shirts display U.S. maps, with one featuring the line “Used to stand for something” from “Capital G” off 2007’s Year Zero, and the other incorporating the artwork and title of 1992’s Broken EP.

At least one shirt offers a somewhat positive note, showcasing the song title “We’re in This Together” from 1999’s The Fragile.

Like everyone else in the world, the pandemic impacted Nine Inch Nails’ own plans for 2020. The band had intended to tour later this year, but those dates are now on hold. What’s more, the induction ceremony enshrining NIN into the Rock & & Roll Hall of Fame was moved from April to November, and will no longer take place as a physical event. (Originally, Reznor was to be the only band member inducted, but six other current and former NIN members were recently added to the band’s list of honorees.) Reznor is putting all this new-found time to good use, however, as he’s currently writing music for the next Nine Inch Nails album.

NIN’s “Pandemic 2020” line of T-shirts, seen above and below, begin shipping October 26th and can be pre-ordered for $25 each at the band’s online store. While you’re at it, see our own line of T-shirts and face masks at the official Consequence Store.