A French-language single off their forthcoming album, The Jungle 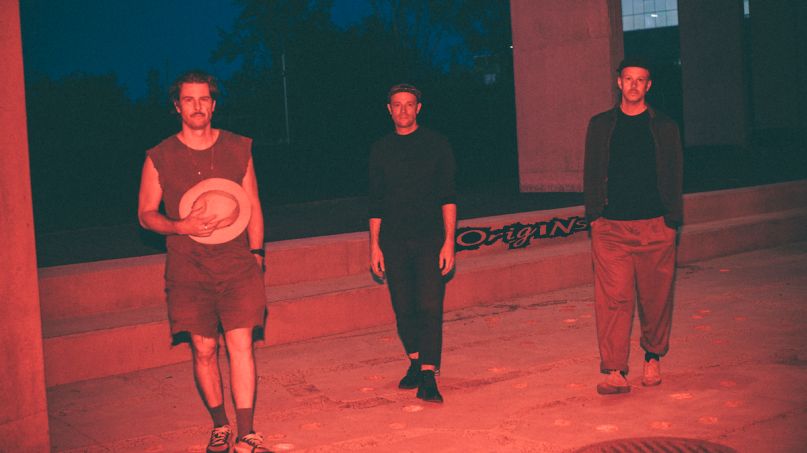 With our new music feature Origins, artists have the chance to pull back the curtains on the stories behind their latest single. Today, Plants and Animals discuss the je ne sais quoi or “Le Queens”.

After four years away, Plants and Animals are set to return with their new full-length, The Jungle, on October 23rd. Early singles like “House on Fire” and “Sacrifice” portended a collection of catchy but chaotic sonic landscapes. The latest sample of the effort, “Le Queens”, offers a counterpoint to that aural bedlam — with a touch of Quebecois.

A haze of distorted guitars and synthesizers, “Le Queens” is a much mellower tune than the previous Jungle singles. But there’s still a sense of disorder in the background, with percussive samples running ramshackle beneath the kaleidoscopic flow of the other instruments.

Adding to what the band says is the track’s “je ne sais quoi” is the fact that it’s sung almost entirely in French. Even if you don’t understand every lyrics, however, the feeling of distorted romance is made clear in the instrumentation. Or, at least, in the bits of English singing such as, “Baby don’t you laugh/ ‘Cause hearts get broke like that.”

Check out “Le Queens” via its accompanying music video below, followed by Plants and Animals’ Origins of the song.

After a feast at Astoria Seafood, we ended up a couple years ago in a bar where everybody was dressed like it was prom night, time was slowed down and there was lot of dancing happening. Nic wrote the French part of the lyrics in the parking lot of a mall in Montreal inspired by that surreal evening.

The laissez-faire and nostalgia in Françoise Hardy’s music was an inspiration for Adèle’s vocal interpretation. There is a plenitude in her voice, a melancholy, a romance that suited the lyrics and the vibe of the song.

We wanted to take a looped chord sequence and build a song without changing chords, so no bridge or B sections, just find ways with the flow and vocals build up different sections. A lot of our music in past has relied on really adventurous chord sequences and unexpected left turns. “Le Queens” was really an exercise in flow. We worked on making each section different in the vocal arrangements. Verses were Adele and Warren backing, then pre-chorus Nic came in then the chorus was Warren with Adele backing. It was nice to build tensions and release without changing the harmonic foundation of the track.

Electron Digitakt is a little drum machine sampler box that Warren had just got. He didn’t really know how to use it but we had it plugged in and we found this kind of pop music club bass sound. Its a tiny box and and you can play it like a keyboard but it only has one octave. We were jamming this chord sequence and Warren played the bass line on the Digitakt. Somehow this crazy sound seemed to be a natural fit to the tune that was emerging. Its the kind of thing that you think is really off the wall in the studio and then you play it for friends and they don’t even notice because it somehow works.

Woody was trying to get the hang of a cool new machine that uses acoustic drums as an elaborate sampler. He had some chords programmed in but the sound didn’t fit, so Warren recorded them on a guitar. Woody played those sampled chords with his kick drum and moved through the progression using his snare. It had all the grace of a driving lesson. We ran with it.