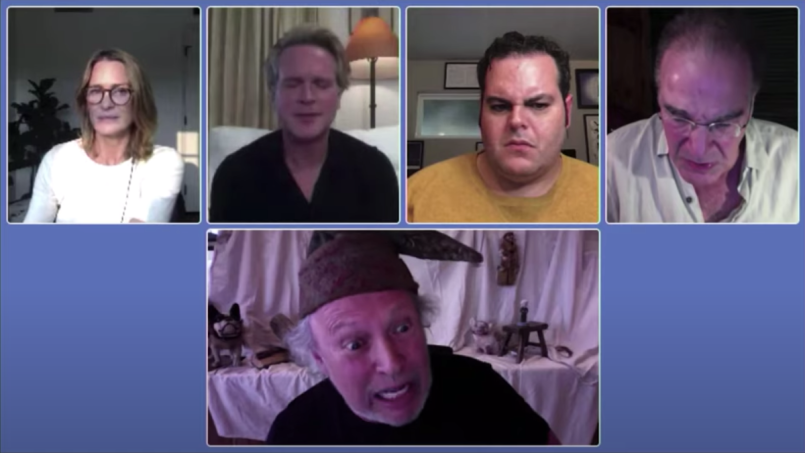 Almost 33 years after the release of The Princess Bride, surviving members of the original cast reconvened on Sunday night for a virtual table read of William Goldman’s classic script.

The live event was moderated by Patton Oswalt, who said, “This movie obviously meant a lot to my generation. This was the suburban mallrats’ intro to Monty Python, surrealism, and satire. So thank you, [director] Rob Reiner, thank you, [producer] Norman Lear, and the entire cast for bringing this to life.”

Reiner, who stepped into the shoes of the late Peter Falk to play the grandfather, emphasized the broader picture before the event began: “We’re here basically to get Donald Trump out of the White House. That’s the main goal.” To that point, proceeds benefited the Democratic Party of Wisconsin.

Even so, Reiner admitted viewers might have other aims, like gawking at the significantly aged cast. “So you’ll see them for the first time — ‘ooh, look how that person looks now!’ — you’ll get to do that.”

The table read was almost derailed by a technical mishap. Leading actor Cary Elwes had trouble connecting to the electronic green room. By not having the I.T. in order, organizers nearly fell for one of the two classic blunders, the first being never get involved in a land war in Asia. Jason Reitman, who read stage directions, joked that moderator Oswalt would have to go on in Elwes place. Oswalt quipped, “They did not log in to see Bilbo Baggins play Aragorn. That is not what you do on your live read.” Luckily, the problem was quickly resolved, and the event was viewed live by about 66,000 people.

There were brief moments of awkwardness, as there always are in these virtual events. But the cast remained as hilarious as ever, and soon Goldman’s crackling dialogue was flying off the page. Elwes returned as Westley, joining castmates Robin Wright, Chris Sarandon, Mandy Patinkin, Wallace Shawn, Carol Kane, and Billy Crystal in reprising their respective roles.

Other cast members were no longer age appropriate, or have since passed away. In addition to Reiner as the grandfather, Finn Wolfhard played the sick grandson, Josh Gad took on the marble-mouthed Fezzik, and Whoopi Goldberg portrayed the mother and the Ancient Booer.

The stream featured plenty of lively moments. Patinkin’s accent remains a delight, and his commitment to acting out the stage directions provided some visual interest. At one point, Elwes donned a medical mask to quote the line, “It’s just that masks are terribly comfortable. I think everyone will be wearing them in the future.” The proceedings ended with a Q&A led by Oswalt. Check out the table read of The Princess Bride below.

Table read fundraisers and nostalgic reunions have been all the rage during the pandemic. Casts to digitally get back together in recent months include those from Ghostbusters, Lord of the Rings,The Goonies, Back to the Future, and Splash.