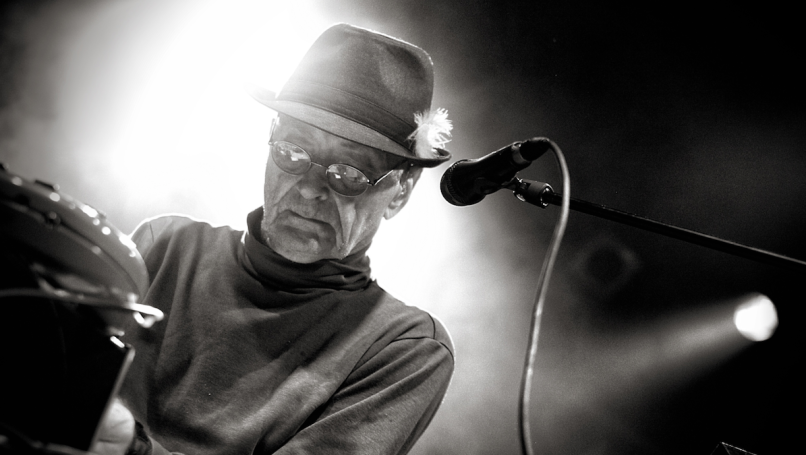 Simeon Coxe, the pioneering electronic musician who co-founded Silver Apples, has died at the age of 82. According to a statement from his manager, Jack Trevillion, Coxe passed away in Alabama after suffering from pulmonary fibrosis, a progressive lung condition (via BBC).

Coxe’s career began as a member of the East Village rock band The Overland Stage Electric Band in the 1960s. When he was introduced to a vintage 1940s audio oscillator by a friend, he began incoporating the machine’s atonal sounds into the band’s live shows. His fellow bandmates were put off by the new notes and all quit, save for percussionist Danny Taylor. Together, Coxe and Taylor formed Silver Apples in 1967, blending electronic sounds into rock and pop structures in ways that would revolutionize the world of electronic music.

Coxe continued to add to his collection of oscillators, eventually putting nine of them together with 86 manual controls to form “a homemade pile of electric junk” he called The Thing. Innovative but unwieldy, the custom instrument was played with hands, elbows, knees, and feet, and could be used to loop in live radio broadcasts during performances.

Silver Apples’ self-titled debut arrived in 1968. While not a big seller, the album drew the attention of John Lennon and Jimi Hendrix, earning them “musician’s musicians” cult status. In fact, Silver Apples jammed with Hendrix on a rendition of “The Star-Spangled Banner” prior to the guitarist’s now legendary Woodstock performance. They were also tapped by New York City Mayor John Lindsay to deliver a live soundtrack to the Apollo 11 moon landing at a watch party held in a rainy Central Park.

For their second album, 1969’s Contact, Silver Apples arranged for the cover photo to be taken within a Pan Am jet’s cockpit in exchange for putting the company’s logo on the artwork. The band followed through with their promise, but also included an image of a plane crashing on the back cover. Pan Am sued, leading to the record being pulled and the band’s gear being confiscated during a show at NYC’s Max’s Kansas City. Silver Jews split up shortly thereafter.

“The result was that we couldn’t play music to earn a living, Kapp [Records] folded, word quickly spread in the industry that Silver Apples were ‘untouchables,’ and Danny and I just said, ‘Screw this!’ And we parted ways,” Coxe recalled to Red Bull Music Academy in 2012.

Coxe wound up in Alabama driving an ice cream truck and reporting for local TV stations. However, in 1994, German label TRC released bootlegs of Silver Apples and Contact, leading to a surge in interest in the band. A tribute album from British label Enraptured dubbed Electronic Evocations — A Tribute to the Silver Apples further spurred fascination in the short-lived project, encouraging Simeon to reactivate the project. He recruited Xian Hawkins and Michael Lerner for a 1997 revival show at New York’s Knitting Factory, going on to record two records with the lineup, 1998’s Beacon and Decatur.

Coxe also dug out recordings for Silver Apples’ planned Contact follow-up, The Garden. Using Taylor’s original session takes and new additions of his own, Coxe released the album in 1998, nearly three decades after it was started.

Though Taylor’s whereabouts were unknown early in Silver Apples revival, Coxe’s frequent mention of him in interviews led to an eventual reunion. However, they were only able to play a handful of shows together before a tour bus accident left Coxe with a broken neck and partial paralysis. By the time years of physical therapy brought him to the point where he felt he could perform again, Taylor’s health had declined due to a degenerative muscle disease. Taylor died in 2005, and rather than replacing him, Coxe continued under the Silver Apples moniker by sampling studio recordings during concerts.

Although his injuries left him with limited feeling in his hands, Coxe continued performing and recording. “… When it came to playing, I discovered it didn’t matter that I couldn’t feel with my hands,” he told Electronic Sound in 2012. “As long as I could see the dials on the oscillators, I could play.” Silver Apples’ final album, Clinging to a Dream, came in 2016.

Coxe is survived by his Lydia Winn LeVert, his long-term companion and creative collaborator.